Ecological attributes include species abundances, traits, and individual condition (e.g., growth or infection status), to name a few. They are multivariate data, but not all of one type.  They can be combinations of presence-absence, ordinal, continuous, discrete, composition, or zero-inflated.   gjam  provides inference on sensitivity to input variables, correlations between responses, model selection, prediction of responses, inverse prediction of predictors, and community classification by response to predictors.

gjam was motivated by species distribution and abundance data, but can provide an attractive alternative to traditional methods wherever observations are multivariate and combine multiple scales and mixtures of continuous and discrete data.

Importantly, analysis is done on the observation scale. That is, coefficients and covariances are interpreted on the same scale as the data. This contrasts with standard generalized linear models (GLMs), where coefficients and covariances are difficult to interpret and cannot be compared across responses that are modeled on different scales and with nonlinear link functions.

gjam exploits censoring to combine multiple data types in a single model, including mixtures of continuous and discrete data.  For example, the microbial community (composition data) might be tracked together with host condition (continuous, categorical, binary, ordinal, …).

Many applications require large numbers of response variables.  Microbiome studies bring the additional complication of composition data.  And most observed values can still be zero.  This paper describes the Dirichlet process prior implemented in gjam that finds a low-dimensional representation for the covariance between responses.

Below are cluster plots of the correlation matrix for a presence-absence model (a), continuous abundance model (b), and the response to environmental variables (d).  The cluster analysis in (c) is based on distances in (d).  These plots are obtained by specifying GRIDPLOTS=T in gjamPlot. 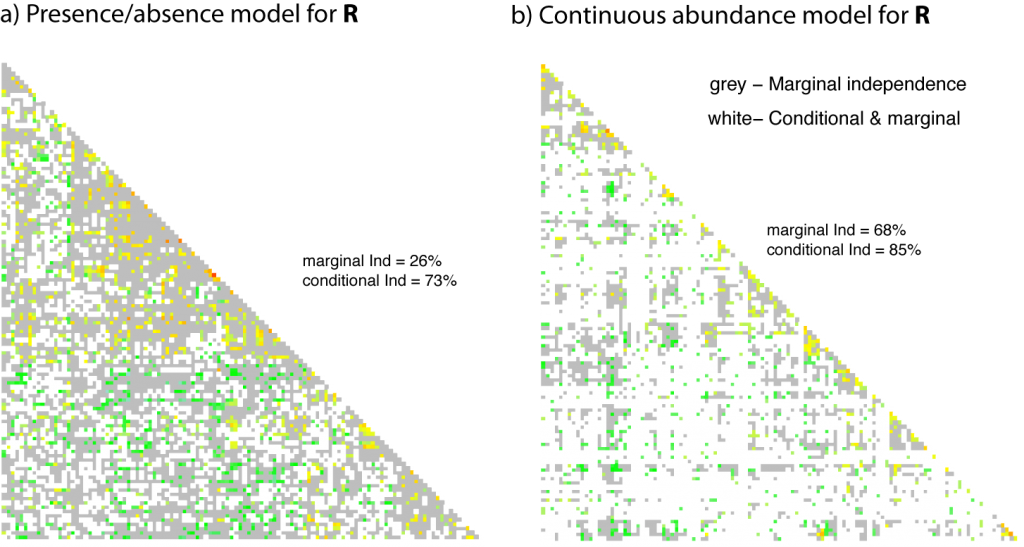 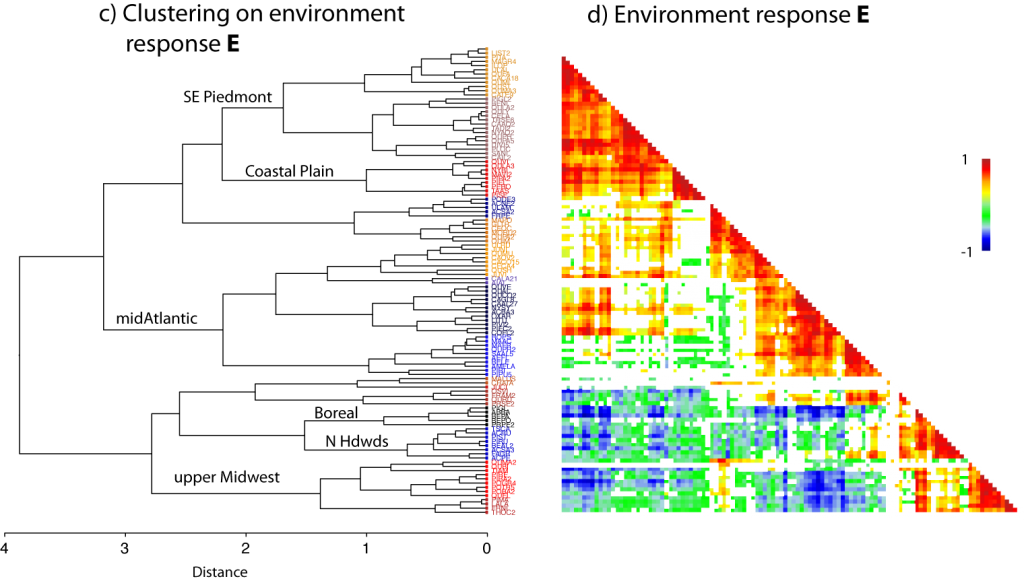 Jim Clark wrote the GJAM model, the R and C++ code, and the GJAM package.

Daniel Taylor-Rodrigues implemented the Dirichlet process in R and C++ in GJAM.

Many others: Students in the course Bayesian Inference Environm Models (BIO/ENV 665) at Duke University and members of the Multivariate Modeling working group of the SAMSI Ecology program contributed many ideas, recommendations, and feedback.

Installation in R or RStudio: