The region includes Central Lowlands in the upper Midwest.  The Canadian Shield in the northwest of this region is composed of metamorphic rocks.   Surficial geology north the glacial limit is dominated by the effects of repeated glaciation, with ground moraine, terminal moraines, and alluvial features that are associated with ice-wasting and outwash. 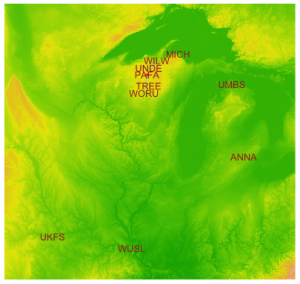 Climates are continental to humid continental, with a pronounced gradient of declining precipitation from east to west.  Cold-dry climates of the upper midwest often include growing season moisture deficits.  To the south and west are WUSL at the edge of the Ozark Plateau and KSBS at the western extent of forest in a region with tallgrass prairie.

The combination of south-to-north temperature declines and east-to-west precipitation declines control vegetation gradients, with local variability dependent on drainage and soils.  The transition from deciduous to conifer forest follows the declines in winter temperatures and growing-season length, and increasing soil organic content.

Sites include two from the Ibanez lab (ANNA, UMBS), one that we started with Mike Dietze on NSF MSB funding, to which we have now incorporated NEON (UNDE), and another NEON site (TREE).  At the edge of the Ozark Plateau is the Tyson Research Center Plot (WUSL) of Jonathan Myers and the NEON site at University of Kansas Field Station (UKFS).