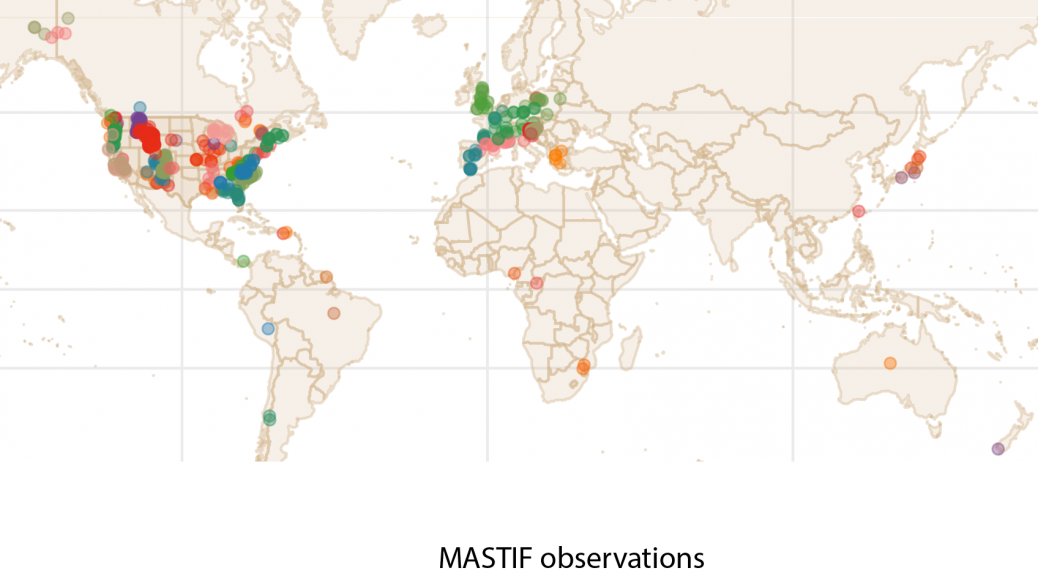 Previously published studies incorporated into the project offer one or both of the two data types.  Both have a direct connection to individual tree-year production, here termed crop-count and seed-trap data.  Observations must connect with whole-tree fecundity for a given year; we cannot extract tree-year production from studies that provide only averages per tree, averages per trap or stand, or coefficients of variation.

Some studies have observations at the tree-year scale that do not connect to tree-year production and had to be excluded.  For example, count per observation time provides a valuable relative estimate for changing production by an individual tree. However, it cannot be connected to total crop production by the tree.

Seed trap studies that lack location information either for traps or trees do not allow for estimates of fecundity.

The most common reason for excluding a study was the absence of raw data. There are many studies in the literature based on tree-year observations for which we could not obtain the original data.

Seed-trap data are counts from seed traps within mapped stands.  The data model links seed-trap counts to an intensity function for expected seeds per area of ground surface per year.  This intensity is linked, in turn, to tree fecundity through a transport model, or dispersal kernel, again, requiring known locations of trees and seed traps.

Our seed traps are 1/2 m2 in area, but other sizes are fine.  Ours are suspended 1/2 to 1 m above the ground to minimize seed predation by ground foraging mammals and birds. In areas with substantial predation we cover them with ‘chicken wire’, which allows seeds in but limits predation.

Seed traps are emptied weekly to seasonally, depending on the study. Seeds that cannot be identified to species level are recorded at the genus level. Seed traps that are inactive during a collection period due to loss or damage are recorded.

Crop-count data are counts associated not with surface area of forest floor, but rather with individual trees and years.  There are three elements to the data model, the crop count of seeds, fruits, or cones observed, the crop fraction, an estimate of the entire crop represented by the count, and the crop-fraction error to allow for uncertainty in the crop fraction.

A second crop-count method has been used where conspecific crowns are isolated and wind dispersal is limited.  Here the crop fraction is based on the ratio of seed-trap area for traps placed beneath the canopy to the projected crown area.  Examples include HNHR (Knops and Koenig 2012) and Katie Greenberg’s acorn mast network that includes BCEF (Rose et al. 2011). The crop-fraction error estimate depends on uncertainty in the canopy projection area.

A third crop-count method is based on evidence for past cone production that is preserved on trees.  This has been used for Abies balsamea at western Quebec sites (Messaoud et al. 2007), Pinus ponderosa in the Rocky Mountains (Rodman et al., 2019), and for Pinus edulis at southwest sites by Miranda Redmond (Redmond et al. 2012) and Andreas Wion.

For data sets where both seed traps and counts are available MASTIF integrates them making use of conditional independence (Clark et al. 2019); latent states represented by maturation state and fecundity absorb the marginal dependence between seed-trap and crop-count data.

Crop counts of seeds, fruits, pods, or cones are combined with the fraction of the crop that the count represents.  This is the basis for a conditional binomial likelihood in model fitting, binom(yc|n, p), with observed y (fruit or cone count), c (seeds per fruit or cone), p (crop fraction), and unknown number of seeds/fruits/cones n, the quantity of interest. The crop fraction p is an estimate of how much of the crop has been observed and thus has uncertainty.  When the entire crop is visible, p = 1, and uncertainty in p is zero.  However, when a value is assigned of, say,  p = 0.5, then the observer can additionally assign a error representing her uncertainty in p.  If p is believed to fall within an interval (0.4, 0.6] then the standard deviation in p might be in the range of, say, (0.05 – 0.1).

Where there is no estimated error, we assigned a value based on experience.  For example, the Franklin network does not include estimates of canopy fraction, reporting instead all cones that could be seen from a fixed location.  From our extensive crop counts in this region we synthesized crop fraction estimates and uncertainty for the same species.

The conditional binomial likelihood binom(cy | n, p) is combined with a distribution for crop fraction beta(p | a, b), where parameters (a, b) come from the estimate of p and its standard deviation (through moment matching).  In the figure above is shown the probability of observing y (c = 1) for a range of true values n, where 75% and 30% of the crop is observed (black and blue solid lines).  Marginalizing the uncertainty in the estimate of the crop fraction p gives betaBinom(y | n, a, b) (dashed blue line, Clark et al. 2019).

Cones can develop over one to three years, depending on the species. Female cones typically expand from buds in the spring, remaining small and closed for the first year.  Pollination may occur in the second year, after which cones expand rapidly and eventually brown when cones open and seeds begin to disperse.  Cones can begin to open in fall of this second year, but seeds may release throughout winter. Most cones mature zero, one, or two seeds per bract.  To obtain seeds per cone, cones are sampled from multiple individuals and locations and counted.

We do not count the new cones that will shed seeds the following year, because they are too small to reliably count, and we do not know how much attrition will occur during the first and second year of development.

Seed predation begins in the canopy, where squirrels dismember cones, and birds can extract seeds after cones open but before seeds are dispersed.  Uncertainty in the model has to allow for variation in seeds per cone, in addition to cone production and seed dispersal.  Due to canopy predation, seed trap counts are conservative.