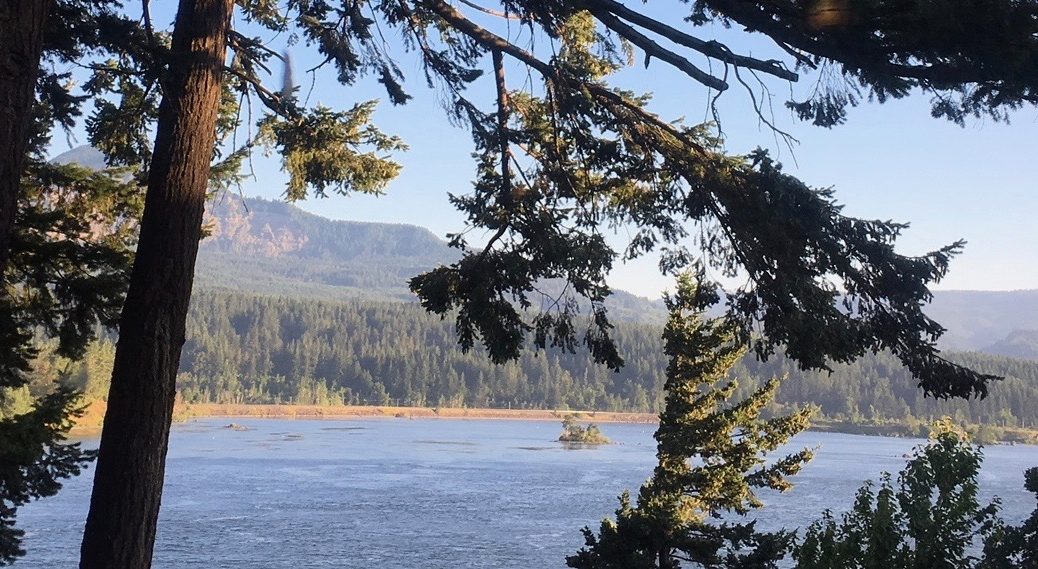 The Wind River Experimental Forest, north of the Columbia River River Gorge and part of Gifford Pinchot National Forest, has been studied by the USFS since 1908.  With one exception, plots occupy the slopes of an ancient volcano, with substrates consisting of weathered aa lava, including many large boulders, and steep terrain.  Old growth stands in this moderate, winter-precipitation climate support the the iconic Pacific Northwest species, including Pseudotsuga menziesii, Tsuga heterophylla, Abies amabilis, Thuja plicata, and Pinus monticola.

Data from this site come from two sources, our sampling at NEON WREF plots, and the Wind River Forest Dynamics Plot, established by Jim Lutz, with seed trap data collected by Janneke HilleRisLambers.

The WREF site visit began with a stop at the NEON domain office in Vancouver Washington and discussions with the Ben Vierra, who explained that tree censuses are scheduled several years in the future.  Christoph and Jim were joined by Janneke for two of the sampling dates.

Plot 9 is the highest elevation plot on a steep aa lava flow of weathered boulders.  Tsuga heterophylla and Pseudotsuga menziesii occupy an open canopy.  Vaccinium ripe with berries dominate the understory.  Due to large tree size, we mapped the NEON 40×40 plot, including all trees > 2 cm in diameter.

P. menziesii and T. heterophylla dominate plot 11 with Acer circinatum in the understory.  Some trees are already tagged, perhaps by NEON.  This young stand consists of small trees.

Plot 4 occupies a valley of low relief with T. heterophylla and P. menziesii dominant in the canopy.  This old-growth stand included large canopy gaps from blowdowns that littered the plot with > 1 m diameter stems.  Berries of mature Taxus brevifolia had already ripened and been consumed by the time of our census; few were observed on large trees.  The understory included A. amabilis recruitment and abundant Vaccinium with ripe berries. We mapped trees > 4 cm diameter on the 20×20 on 14 July and trees > 30 cm diameter on the 40×40 on 15 July.  All Taxus individuals were mapped.

Plot 12 lies the northeast of the main site on an alluvial bottomland.  P. menziesii dominates the canopy, with Acer circinatum, A. macrophyllum, Cornus nuttallii in the understory.  We mapped trees > 30 cm diameter in the outer 40×40; we will use NEON data for the 20×20.  Unlike other plots, this fertile site supported few cones and canopy, and few were found on the forest floor.  Christoph discovered yellow jackets in the 20×20.

Plot 5 included some T. plicata in an open canopy over A. amabilis recruitment in the understory.  We mapped the outer 40×40 plot.

Plot 1 represents a recent blowdown, with many trees snapped 10 to 20 m high.  The residual canopy includes large P. menziesii and T. heterophylla.  There is a high density of Vaccinium with ripe berries in the understory that includes limited recruitment of A. amabilis, some just reaching maturity.  We mapped all trees.

Plot 14 is an old growth stand, with some large P. menziesii in a canopy that is dominated by A. amabilis.  Vaccinium is abundant in the understory.  We mapped the outer 40×40.

Plot 7 includes some large P. menziesii in the canopy, scattered T. brevifolia, but mostly A. amabilis.  We mapped the outer 40×40.