Research in the Clark lab focuses on biodiversity and global change, including how species coexist and how they are influenced by changing climate and natural and human disturbance.  Studies range in scale from field plots to continental data sets.  Large, long-term experiments are central to the approach.  There is emphasis on modeling innovation to synthesize evidence from many sources.

Summaries of some current projects are below: 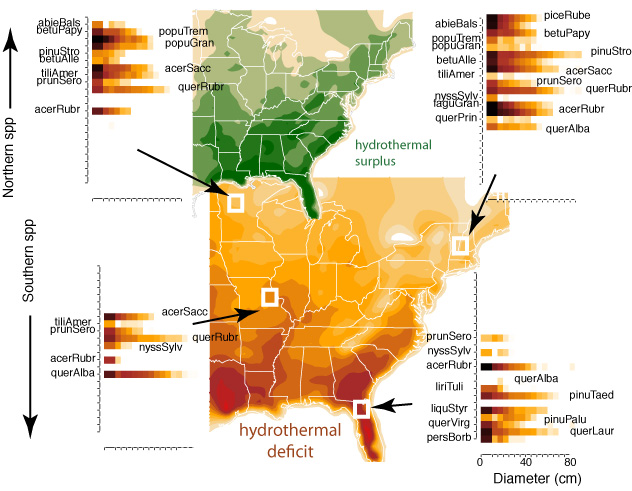 Ecological Forecasting (NSF, NASA). Generalized Joint Attribute Modeling (gjam) is being implemented to predict biodiversity responses to climate change.  One of our main data streams is the NEON, which is monitoring a number of species groups across the US.

US.  Forecasts will be updated as data accumulate for NEON, land cover, climate, and remote sensing products. Forecasts will include species and community types at risk now based on habitat and biotic neighborhoods.  They will include community reorganization expected with climate change.

Macrosystem Science: forest dynamics and climate change (NSF).  Climate change is rapidly transforming forests over much of the globe in ways that are not anticipated by current science.  Large-scale forest diebacks, apparently linked to interactions involving drought, warm winters, and other species, are becoming alarmingly frequent.  Models of biodiversity and climate have not provided guidance on if/where/when such responses will occur.  By sampling and analysis at the individual scale across continental variation in climate, this study can link the individual scale processes to regional responses.  This collaboration involves six institutions.  The project aims to determine the extent to which species indirect effects and interactions between habitat and climate control responses to climate change.

Seed dispersal near and far: patterns across temperate and tropical forests

The capacity for replacement through reproduction is one of the first requirements for persistence of any species.  The variables that control maturation, fecundity, and seed dispersal must all be inferred together from highly indirect data.  This paper is cited as the framework for accurate inference and prediction.  It has been implemented by labs all over the globe.  Software in development here.

The seasonal timing of warming that controls onset of the growing season.

Forecasting how global warming will affect onset of the growing season is essential for predicting terrestrial productivity. We show that accurate estimates require ways to connect discrete observations of changing tree status (e.g., pre- vs. post budbreak) with continuous plant responses to fluctuating temperatures. Results identify a critical window concentrated in late winter, weeks ahead of the main budbreak period. By late February/early March forecasts can predict early vs late onset of growth.

This paper laid the foundation for a new initiative in ecology, focused on using information to anticipate, and potentially mitigate, responses to global change.  It is cited as the motivation for many new efforts to provide predictive understanding of change.

This paper can resolve a decades-old question in ecology, that of explaining why so many competing species could coexist on a small number of limiting resources.  Species-level differences are not apparent from species-level data, masked by averaging over individuals in species-level data.  Species differences masked by the phenomenon known as Simpson’s Paradox or the ‘ecological fallacy’ become apparent when analyzed at the individual scale: individuals respond more like others of the same species, thus concentrating competition within the species.

Failure to migrate: lack of tree range expansion in response to climate change

Changing geographic distributions have been the focus of climate change studies—evidence that populations can move to sites that become favorable.  More concerning is the possibility that they cannot. From a large analysis of inventory data across North America, results showed that tree species lack the capacity to track rapid contemporary climate change.

Synthesis of biodiversity data has not had a valid basis for inference and prediction.  Species are observed on different scales, and most are absent from most observations. They respond to one another at the same time that each is responding in its own way a changing environment.  Generalized joint attribute modeling (GJAM) provides a first advance towards integration, providing excellent parameter recovery and precise prediction of entire ecological communities.  More on GJAM software here.