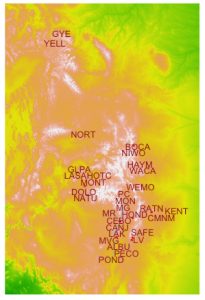 Yellowstone is a NEON site sampled by the Duke and NCSU labs.  Data from the Greater Yellowstone Monitoring Network was obtained with the help of Kristin Legg, Rob Daley, and Erin Shanahan.