The region extends from New England to the eastern provinces of Canada.  Topographic features include north-south trending mountain ranges (Taconics, Greens) and the Whites.  Northern New York includes the Adirondacks and Catskills.   Surficial geology, including soil development, is dominated by the effects of repeated glaciation, with ground moraine, terminal moraines, and alluvial features that are associated with ice-wasting and outwash.  Young Holocene soils are comparatively rich relative to weathered soils south of the glacial limit. 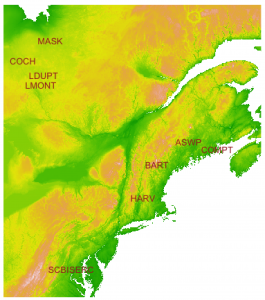 The south-to-north temperature decline explains biome transitions at the regional scale, with local variability dependent on drainage and soils. Growing season deficits are not unusual, but moisture surpluses during all months is the norm. Eastern sites track temperature gradients from Piedmont (SERC) to central New England (HARV, BART) through transitions that lead to boreal forest in western Quebec (MUST, COCH, LDUPT, LMONT).

The HARV NEON site is part of this study.  In addition, we have long-term data from HARV and BART that was initiated as the part of a previous Macrosystems grant from the National Science Foundation.  Mike Dietze’s lab is sampling BART.  Western Quebec sites come from the study by Messaoud, Bergeron, and Asselin.

Further south, mid-Atlantic sites have substantially warmer winters than New England and develop moisture deficits most years.  The SERC NEON site is part of our analysis.  We also include Bill McShea’s study from SCBI.  We did not install new seed traps at the NEON SCBI site due to concerns over bear damage.