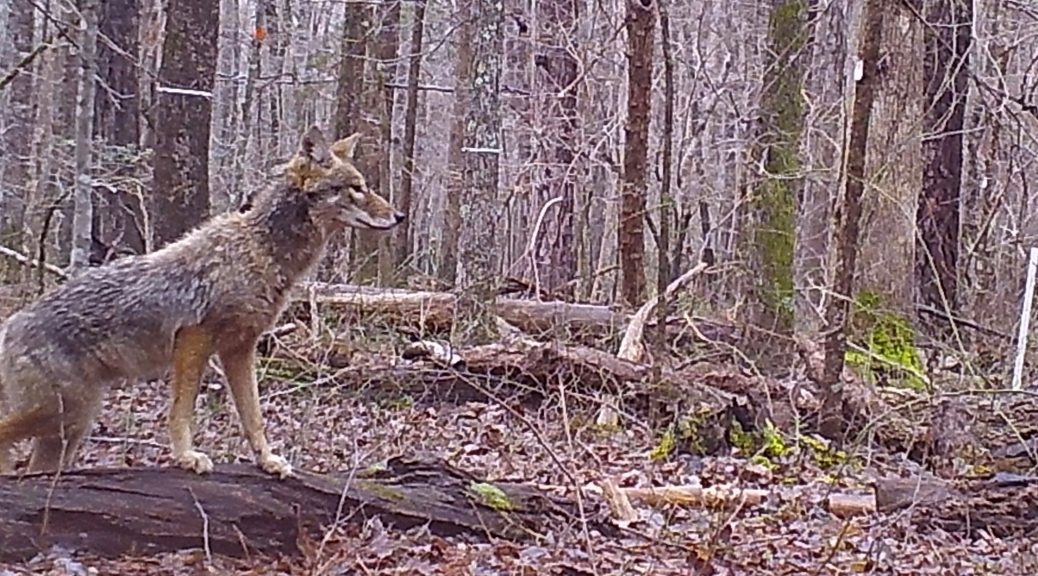 The portions of the Duke Forest included in this study lie within Durham County and Orange County, NC.  Duke Forest is owned by the university.  Since 1931 it has been managed for teaching and research.  The region was agricultural until the early 20th century, at which point farm abandonment was followed by second-growth pine and, later, hardwoods.  Sites that escaped cultivation, including bottomlands, support large hardwoods and P. taeda.  Establishment and maintenance of our study plots has been made possible by the Duke Forest staff, including Judd Edeburn and, more recently, Sara Childs.

Mast masting has been monitored continuously at Duke Forest since 1999.  Seed trap sampling is part of the long-term forest demography plots at the Blackwood (plots HW and BW) and Eno (plots EE and EW) Divisions of Duke Forest.

The Hardwood Plot (DUKE-HW) was established in 1998 just west of the FACE (Free-Air CO2 Enrichment) site.  The coyote at the top of this page was captured by camera trap at DUKE-HW.  This bottom-land hardwood site has saturated soils much of the year.  The diverse canopy includes a mixture of pines and hardwoods.  Sampling at this site was expanded with the implementation of canopy gaps and deer exclosures in 2009.

The Blackwood Plot (DUKE-BW) was established in 1999 to span a moisture gradient from xeric upland Pinus spp. and Quercus spp. to bottomland P. taeda and Fagus grandifolia.  It has since included canopy gaps, established in 2002 and 2009, and sapflux studies.

The Eno West plot (DUKE-EW) was established in 2003, with a deer exclosure and canopy gaps implemented in 2009.  This upland xeric site has a sparse understory and limited recruitment.  The canopy is dominated by Quercus spp., Acer rubrum, Oxydendrum arboreum, and Nyssa sylvatica.

The Eno East plot (DUKE-EE) occupies a bottomland, dominated by hardwoods, and an adjacent hillslope with immature P. taeda.  This plot was established in 2007.

The Pinus palustris stand DUKE-PIPA was planted on sandy soils in the Durham Division of Duke Forest in the 1930’s.  It has been maintained with controlled burns.  This site has a cone-count plot established by us in 2018.

The DUKE-PICR site occupies a ridge and bottomland mixed pine and hardwood site.  This forested suburban landscape has a former Duke Forest matrix with interspersed houses on 1/2 to 1 acre tracts.  Crop counts on multiple species were started in 2018.

The DUKE-CAST is a mixed experimental planting of Castanea mollissima and C. crenata in the 1930s. Our monitoring of this stand began in 2019.

In addition to long-term demography plots, seed traps and cone production were monitored at the time when FACE was active, starting in 1996.  The six FACE rings have plot names DUKE-FACE1, …, DUKE-FACE6.  Cones were counted from the FACE towers.

Climate data include our wireless sensor networks and the RAWS installation at DUKE-BW.

Mast data are described in publications, including: