The Role of TRPA1 Receptor in Toxicology 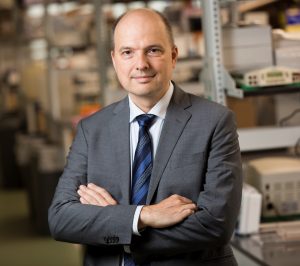 Sven-Eric Jordt is an Associate Professor of Anesthesiology, Pharmacology & Cancer Biology at Duke University School of Medicine and faculty in the ITEHP program.

Dr. Jordt trained as a biochemist at the Free University of Berlin from 1989-94, continuing with doctoral studies on ion channel mechanisms in the lung and brain, receiving his Ph.D. in 1997.  In 1998, Dr. Jordt began postdoctoral studies in the laboratory of Dr. David Julius at the University of California, San Francisco.  He contributed to breakthrough discoveries in pain research by identifying receptors for pain-inducing natural products and thermal stimuli.

In 2005, Dr. Jordt established his independent laboratory at Yale University, where he discovered TRP ion channels as targets of smoke irritants, chlorine gas, tear gas agents, and industrial chemicals causing pain and lung injury.  He relocated his lab to Duke University in 2014.

At Duke he continued identifying and developing treatment interventions for chemical injuries, funded by the NIH Countermeasures Against Chemical Threats program.  Other projects focus on the role of the chemosensory innervation in environmental allergic conditions (asthma, poison ivy contact dermatitis) and on the toxicity of flavor chemicals in tobacco products, including electronic cigarettes.

Dr. Jordt received the Presidential Early Career Award for Scientists and Engineers (PECASE) and the Outstanding New Environmental Scientist Award (ONES) by NIEHS, among other awards.  He served as Chair of the Terrorism and Inhalation Disaster Section of the American Thoracic Society (ATS) and received the 2019 Leading Edge in Basic Science Award by the Society of Toxicology (SOT).