A fish is not a rat is not a chimpanzee. Or is it?

When we think about scientists studying what affects our behavior or what causes neuro-behavioral disorders, we think about rats running in mazes and chimpanzees learning sign language. Rats and chimpanzees are mammals and they make sense as experimental animals because they are related closely to humans in terms of many biological aspects, including the ways that their nervous systems and behavioral expressions work and develop.

One animal we don’t usually think about using for these experiments are zebrafish (Figure 1).

It seems like a pretty big leap for scientists to claim that the behavior of a zebrafish swimming in a tank can be used to understand the behavior of a person diagnosed with anxiety disorder or a child with ADHD, but in fact zebrafish are an important and useful model for testing the development of the brain and how it controls behavior.

Zebrafish are small, guppy-sized tropical freshwater fish native to the Himalayan region, and very popular as aquarium fish. In scientific research, they started off as a cheap and easy to maintain experimental model organism for studying early developmental processes in vertebrates. In the last decade and a half, however, they have also gained significant momentum as a model for investigating the causes and progression of various behavioral disorders.

Taking a leap…into the fish tank

So how can these small fish, that lack the highly-developed cerebral cortex so characteristic of mammals, teach us anything about complex human behaviors such as emotional reactions, social interaction, or the ability to learn and retain memory?

As an increasing number of neuro-behavioral scientists have taken the leap, many of the behavioral assays used in mammals have been tested on zebrafish. As it turns out, zebrafish and mammals share many types of behaviors that may appear different when executed with fins rather than with legs and arms, but are driven by similar motivations and nervous system mechanisms.

Fish have feelings, too 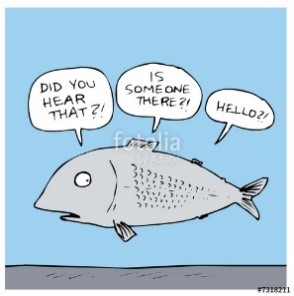 Being small prey-fish, zebrafish have very strong and well characterized anxiety-driven reactions to new environments or any stimulus that might trigger a predator-evasion behavior. One of the most popular behavioral assays to test anxiety-driven behavior in zebrafish is called the ‘novel tank dive test’. This assay tests the reaction of the fish when introduced to an unfamiliar environment, which is a stressful situation since it may contain unknown threats.

This assay was adapted to zebrafish from the veteran ‘open field’ test used in rodents since as far back as the 1930s (Figure 2A). When a mouse or a rat is placed in a large and unfamiliar cage, their movement will initially be restricted to the periphery of the cage in a pattern called thigmotaxis, which is used in behavioral science to describe the tendency to remain close and in touch with the walls (Figure 2B). This behavior is interpreted as the avoidance of potential threats, such as predators, that may be lurking in the unfamiliar environment. In other words, venturing into the center of this new environment is risky and stressful, while sticking to the wall eliminates at least one dimension from which a threat can emerge and thus feels safer. Over the years many studies have shown that this anxiety-driven behavior can be reduced by pre-treatment with known anti-anxiety drugs such as diazepam (Valium) and buspirone.

Zebrafish have their own behavioral pattern in this novel environment situation (Figure 3). When individual fish are taken out of their home tank and placed in an unfamiliar one, they will typically dive directly to the bottom of the tank and will often stay there with little or no movement for a minute or two. This is viewed as the zebrafish equivalent of thigmotaxis. Gradually the fish will increase their swimming activity, and will swim further away from the bottom of the tank (equivalent to the perimeter of the cage in rodents). The same drugs shown to have an anti-anxiety effect in rodents (and humans), caused a reduction in the novel tank-related behavior in zebrafish.

At this point we might ask, if we can learn similar things from rodents as from zebrafish, can we now replace our old mammalian supermodels with these many new and shiny ones?

Zebrafish will probably never replace the use of mammalian models in understanding complex behaviors, but they provide the great combination of having a large behavioral repertoire and being easy to maintain and breed in large numbers for high throughput studies that aim to screen through many factors potentially affecting behavior, such as pharmaceuticals, drugs and toxins.

At the Neural and Behavioral Toxicity Assessment Core (NBTA) of the Duke University Superfund Research Center (laboratory of Dr. Ed Levin) we take advantage of the zebrafish model to learn how exposure during embryonic development to industrial chemicals such as pesticides, flame retardants, cigarette smoke, and polycyclic aromatic hydrocarbons (PAHs), may have a long-term impact on brain function and behavior.

In our laboratory, we have observed specific effects in the novel tank dive test of either reduced or increased anxiety for all the above listed chemicals. For example, we found that when zebrafish embryos were exposed to the pesticide chlorpyrifos during the first five days of their life (their period of embryonic development), and then grown to adulthood without any further exposure, their response to the novel tank dive test was much lower than fish that were not exposed at all. The chlorpyrifos-exposed fish did not dive as much towards the bottom of the tank. This means that chlorpyrifos had a life-long anti-anxiety-like effect on the fish, causing them to inadequately respond to what is normally a very stressful or anxiety-inducing situation.

The zebrafish studies with chlorpyrifos are important for the scientific community to help inform risk assessment, but they cannot be used in isolation. The findings are taken together with studies in other animal models and studies that follow exposed human populations to help policy makers decide on acceptable exposure levels, or in the case of severe effects, which chemical uses should be discontinued. These studies also provide scientists with important insights into the mechanism of how the chemicals cause toxicity in the brain. These mechanistic findings can lead to ways to prevent or alleviate the consequences of exposure. So, while a fish is not a rat is not a chimpanzee, they are each important. When we compile our findings from studies in each of these types of animals, we can better inform our risk assessment and overall understanding of human exposures.