By Casey Lindberg, Ph.D. student, as told to Catherine Kastleman

My research here at the Duke Superfund Research Center in Dr. Richard Di Giulio’s lab is focused on understanding the impact of a large class of compounds known as polycyclic aromatic hydrocarbons (PAHs) on Atlantic killifish (Fundulus heteroclitus), a species of fish that can be found in estuaries all along the eastern shore of the United States. Among the PAHs are compounds known to cause cancer and perturb development in humans and other animals.

I’m especially interested in subpopulations of killifish inhabiting the Elizabeth River estuary in Tidewater, Virginia, that have evolved to become resistant to the acute effects of PAHs after decades of exposure. The source of these PAHs in this estuary are now-defunct industrial plants, some of which used a compound called creosote to preserve and treat lumber so that it could be used for building purposes. This creosote was derived from coal tar and is highly enriched in PAHs which are also the most problematic components of crude oil. Extremely high levels of PAHs have been found in sediment where these plants operated and, interestingly, there are also large numbers of killifish.

In a normal population of killifish, exposure to PAHs during embryonic development can cause serious health effects such as heart deformities, behavioral changes, immune system defects, DNA damage, and even cancer. Any of these problems could prevent a young fish from hatching or prevent it from reaching adulthood. The Di Giulio Lab has found that populations of fish that have been exposed to creosote pollution for many decades are actually resistant to the toxic effects normally associated with PAHs. Even after high levels of PAH exposures, killifish embryos from these sites can grow up to be normal, healthy fish.

The two main questions I ask in my research are: 1) are there tradeoffs or costs to the fish’s health in exchange for this kind of resistance and, 2) how does PAH resistance impact the fish when it is exposed to multiple different “stressors” in the environment (e.g. low oxygen levels in the water due to high amounts of pollution or sudden changes in temperature)? We predict that our resistant populations of killifish will be much more vulnerable to other sources of stress and could potentially face other consequences, such as reduced swimming ability.

By answering these questions, we will be able to understand long-term effects of pollution on fish populations and local ecosystems. Although they appear to almost completely withstand the acute effects associated with PAHs, Atlantic killifish populations localized to areas near highly polluted sights are still suffering less visible consequences. Changes in behavior or abilities of the fish can drastically impact its chances of survival in the wild. If the remaining killifish are more vulnerable than healthy populations, natural disasters such as severe weather and climate change could potentially impact entire food webs.

With this work, I will hopefully convince ecological risk management experts, fellow scientists, and the public that allowing pollution of this type to persist in the environment could severely harm local fish populations and all of the other organisms and people who depend on them. It might even show us how PAH exposures during fetal development could impact human children. 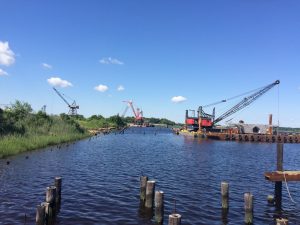 In June of 2016, our lab visited the former Republic Creosoting, Inc., site in Chesapeake, Virginia to collect fish to bring back to Duke. If you looked to the left from where I was standing when I took this picture, you would see a vast industrial site right next to a beautiful little marsh.

McLean Contracting Company is the new organization on the former Republic Creosoting, Inc., site. Despite the history of contamination from other industries in the area, this company has been named a “River Star” by the Elizabeth River Project, which means that they are taking steps to minimize their environmental impact on the river (awesome!). They have been very helpful throughout the project and even let us access their docks in order to catch fish and take samples from the nearby estuary. When we are out collecting samples, sometimes the guys from McLean will even come up and start conversations about the importance of keeping our rivers healthy!

Obviously, to bring fish back to the lab requires catching them first. Here are several pictures of me and a few of the other trainees, including Dr. Nishad Jayasundara, also in the Di Giulio Lab, placing the traps and collecting fish at our study locations. Like any good American, killifish love to eat hot dogs! To catch them, we bait minnow traps with chunks of hot dogs and toss them into the water. Thirty minutes and several pairs of soggy shoes later, voilà! We have our fish! 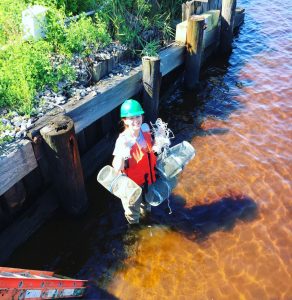 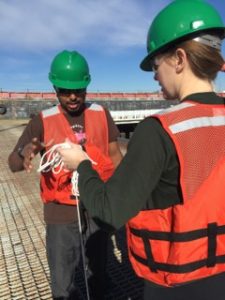 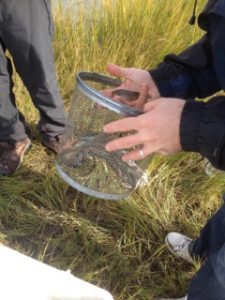 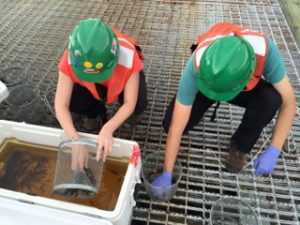 Below, Ph.D. candidate Jordan Kozal and Dr. Di Giulio sort fish at the Scuffletown Creek site so that the fish tissue can be analyzed for PAHs and other pollutants by collaborators at Duke and the Virginia Institute of Marine Science. Scuffletown is also a highly polluted site from a creosote plant upstream. Interestingly, they just built a beautiful playground and a park nearby; it even has a snack stand where they sell Elizabeth River Project t-shirts. But you step into the creek, and it is full of PAHs. 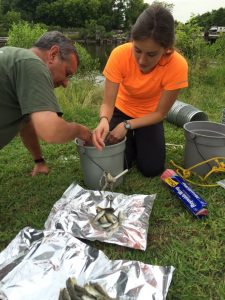 You can read more about our work on the Elizabeth River here.