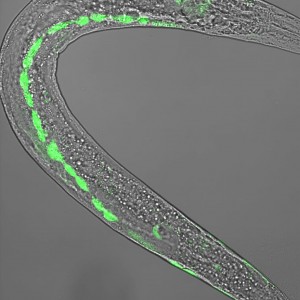 C. elegans, a member of the phylum Nematoda, is a useful model species in many fields of biology, including toxicology (Leung et al., 2008). Referred to fondly as “worms,” these critters grow to about 1 mm in length (just visible to the naked eye) and feed on bacteria. They normally inhabit organic matter-rich environments throughout the world (and are NOT soil nematodes, despite thousands of papers that so state: Caswell-Chen et al., 2009; Felix and Braendle, 2010).  The majority are hermaphrodites, with about 1 in every 1000 spontaneously developing as males in the wild type strain. Wild type hermaphrodites will lay about 300 eggs during a lifetime, and the eggs develop through 4 larval stages (L1-L4) before reaching adulthood. The process of development is nearly identical from individual to individual, and the lineage of each cell in the organism has been described, so that environmental or other perturbations of development are easily observed and studied. Structures and processes can also often be observed in vivo under a microscope. For example, in the image to the upper right, taken by Amanda Bess, a subset of cells produce an autophagy protein fused to green fluorescent protein, allowing us to see autophagy, a process in which intracellular components are broken down and recycled, which we have found is important for handling mtDNA damage that is otherwise irreparable. The three panels of the lower image illustrate how autophagy can be observed under a microscope.

Worms are easily maintained on solid or liquid medium, and the tempo of their lifecycle can be controlled by varying the 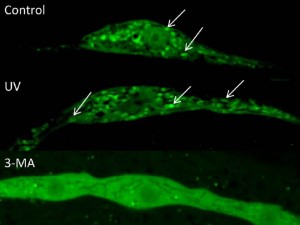 The top image shows one seam cell in which autophagy can be observed as the formation of bright green punctae (autophagosomes). Autophagy increases after exposure to ultraviolet C (UV) radiation, and is decreased by exposure to the chemical 3-methyladenine (3-MA). Images from Bess et al., 2012; the transgenic worm strain was a gift from Alicia Melendez, Queens College (thanks Alicia!).

temperature at which they are cultured. Genetic and genomic tools are particularly well-developed in this species (Antoshechkin and Sternberg, 2007); the outstanding genomic annotation and availability of RNAi libraries as well as many mutant and transgenic strains makes this species especially useful for studies of gene-environment interactions. They are perfect for our stout-hearted studies!

To learn more about C. elegans, try out these websites (there are many other worm resources, but they can be accessed via Wormbase and so are not listed):