Most of us have probably heard the statistic that 70% of our planet is ocean. But what you may not realize is that nearly two-thirds of our ocean is completely outside any country’s jurisdiction, an area known as the high seas or areas beyond national jurisdiction (ABNJ). Over the past several decades, human activity has been rapidly increasing in this unregulated area through fishing, oil/gas exploration, and deep-sea mining, which has led to a greater need for management and policy. But before any kind of management can occur, you need data to inform those policy decisions, which is where Associate Professor of Marine Geospatial Ecology Pat Halpin, Assistant Researcher Professor Daniel Dunn (MEM ’05, Ph.D ’14), and the Marine Geospatial and Ecology Lab (MGEL) enter in the international scene.

In order to fully appreciate the scope of this project and the extent to which MGEL has been involved, a brief history lesson is necessary. In 2002, the world community agreed to establish 10% of the ocean as Marine Protected Areas (MPA). In order to inform the process of establishing MPAs, the Convention of Biological Diversity (CBD) set out to describe Ecologically or Biologically Significant Area (EBSA) in the ocean. Over the next few years, the CBD would work to establish criteria that would be used to identify EBSAs, which included uniqueness, importance for life history of species (i.e. breeding, foraging), importance for threatened/endangered species, or biological diversity. Once the criteria were finalized in 2008, MGEL became involved as one of the founding members of the Global Ocean Biodiversity Initiative- a network of scientific organizations whose initial goal was to support the CBD EBSA process.

MGEL’s first major contribution was developing guidelines for how the EBSA criteria could be applied to proposed locations. After the guidelines were approved, the CBD began to hold regional workshops for nations to describe areas that meet the EBSA criteria. MGEL has been one of two organizations in the world that facilitates these workshops and provides technical support in the form of standardizing, organizing, and providing the data for countries to make their EBSA proposals. To date, MGEL has facilitated more than half of the 15 regional workshops, with the final workshop for the time taking place in Helsinki in February 2018.

Thus far, the regional workshops have considered nearly 90% of the world’s oceans, resulting in around 300 EBSAs. These EBSAs can range from small (5 km2) coastal areas to very large oceanographic features over 11 million km2. Examples of such locations include deep-sea hydrothermal vents, areas important for migratory species, unique habitats, or highly productive areas.

EBSAs do not imply any specific management measures but do indicate a need for enhanced management. One mechanism for managing EBSAs would be to conserve some or all of a site with an MPA. However, there is currently no global legal framework for implementing cross-sectoral (i.e. across shipping, fisheries, and deep-sea mining) MPAs in ABNJ, but it is being developed. Under the United Nations General Assembly (UNGA), the Biodiversity Beyond National Jurisdiction (BBNJ) Working Group met from 2004-2015 and concluded that the existing governance structure was not sufficient to conserve biodiversity beyond national jurisdiction. This conclusion was in part due to the results they were seeing from the ongoing EBSA regional workshops, which confirmed that there were important sites in need of enhanced management in ABNJ. A Preparatory Committee (PrepCom) was formed to develop draft elements of text to form the basis of a new treaty. MGEL was one of, if not the only, ecological academic lab to have participated in all four PrepCom meetings. MGEL also co-authored and edited a series of eight policy briefs and organized side events to help bring data and scientific expertise to the otherwise legal discussion of how to conserve biodiversity in ABNJ. Third year Ph.D. student Guillermo Ortuño Crespo led and co-authored three of the policy briefs distributed at those meetings. “Attending the last two PrepCom meetings has been one of the most enriching experiences in my career thus far and has helped me start understanding some of the dynamics in these international governance fora and if and how scientist can contribute to the unfolding of international conservation processes,” said Guillermo. In July 2017 the PrepCom recommended an Intergovernmental Conference be formed to start negations on a new treaty for the conservation and sustainable use of biodiversity beyond national jurisdiction.  Just a few weeks ago, on December 24th, the UNGA adopted a resolution to move forward with an Intergovernmental Committee starting in September 2018. This new treaty will provide a holistic governance structure for biodiversity over nearly half the planet.

In the meantime, EBSAs can help inform management efforts both within and beyond national jurisdiction. While the EBSA process was originally focused on ABNJ, developments in 2010 opened the doors to considering areas within national jurisdictions as well. EBSA sites within national jurisdiction can be used to inform countries as they develop their own MPA network. EBSA sites can also inform other UN bodies, such as the United Nations Educational, Scientific and Cultural Organization (UNESCO) in establishing World Heritage Sites or the Food and Agriculture Organization (FAO) in establishing Vulnerable Marine Ecosystems to protect fisheries. The criteria that defines an EBSA purposefully closely overlaps with the criteria to establish a World Heritage Site or Vulnerable Marine Ecosystem, making it easier to use existing management structures to create protected areas. In fact, UNESCO released a report last year suggesting the need to extend its purview to allow for World Heritage Sites in ABNJ. All of the examples from the report were EBSA sites. Pat Halpin and Jesse Cleary from MGEL participated in the meetings that led to this report and played a critical role in developing the maps for the meeting. On an international level, the process of EBSA identification is important because it is the only global intergovernmental sanctioned effort to identify important areas in the ocean, and at no other point in time has there been such broad stakeholder engagement to identify and conserve biodiversity beyond national jurisdiction.

If it isn’t evident already, every part of this UN process takes a significant amount of time. After all, the process to start determining how to create MPAs in ABNJ began in the early 2000’s and we are just now getting to the formation of a committee to draft language for a treaty to do so. “An entire career could go by waiting for this to happen. It moves on a geological time frame,” Pat joked. But it is no easy feat getting more than 190 countries to agree not only on every paragraph, but every word and comma. Suggesting changes to even the smallest section of text can re-open aspects that were agreed upon years before and result in major delays. It is a very delicate process, one that is often frustrating for scientists (like those in MGEL) who want to continually improve systems and provide the best available knowledge to those intergovernmental fora.

When they are not facilitating workshops at the UN, MGEL is actively involved in several other projects looking at the distribution of human uses of ABNJ and how they can be managed spatially. MGEL is currently a research partner on the Global Fisheries Watch project, which uses satellites to track fishing vessels and look at patterns of global fishing. This has given researchers the ability to monitor fishing efforts in ABNJ in near real time, which has never been done before. MGEL has also been actively working with fellow Nicholas School faculty member, Harvey W. Smith Professor of Biological Oceanography Cindy Van Dover on protecting biological diversity in potential deep-sea mining sites. Currently there is a strong interest by mining companies in the Mid-Atlantic Ridge, which is rich in sulfide deposits. As such, the International Seabed Authority (ISA) under the UNGA has begun leasing out areas for exploration. Daniel Dunn and Cindy led a broad group of 48 co-authors to establish a framework for the development of Areas of Particular Environmental Interest (APEI) that could be set aside from mining activities to protect unique and representative deep-sea ecosystems. The manuscript is currently in review at Science Advances as part of a special issue on the future of ABNJ.  The project has been a great example of collaboration and has brought together the mapping and spatial analysis expertise of MGEL and the deep-sea biological expertise and network of the Van Dover Lab.

It is difficult to concisely explain the complexities and depth of all the various project that MGEL works on, particularly those involving the UN and ABNJ. But at its core, MGEL is “illuminating the oceans, not just above the water, but below as well,” according to Pat. He says, “We are trying to see all the activities and uses going on out there. The more we can say about what we know about the oceans, the more we can have an impact on policy”. With the help of MGEL, we are able to understand more about how the oceans are being utilized, by both humans and wildlife, to work together to protect it through policy measures. 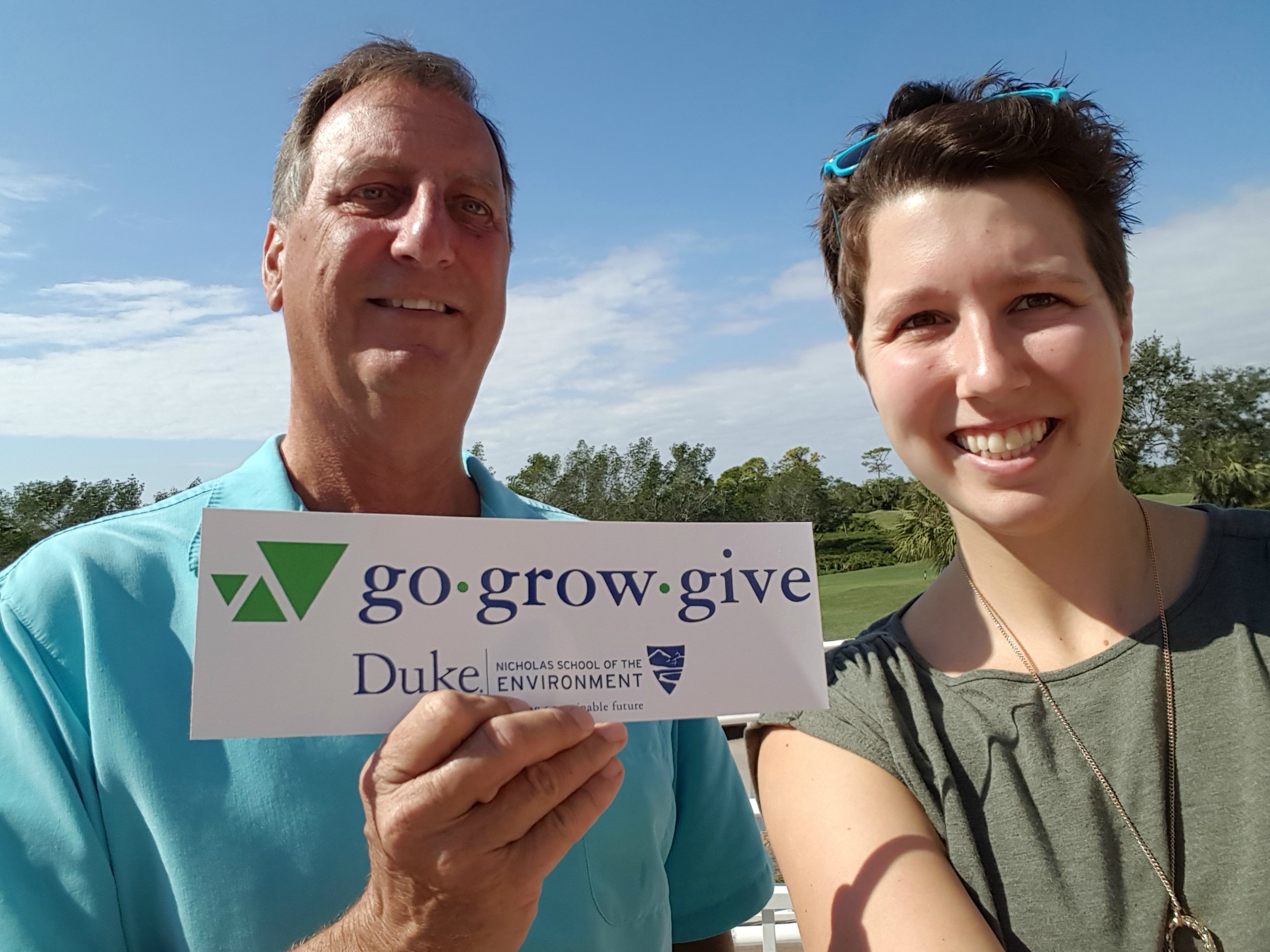 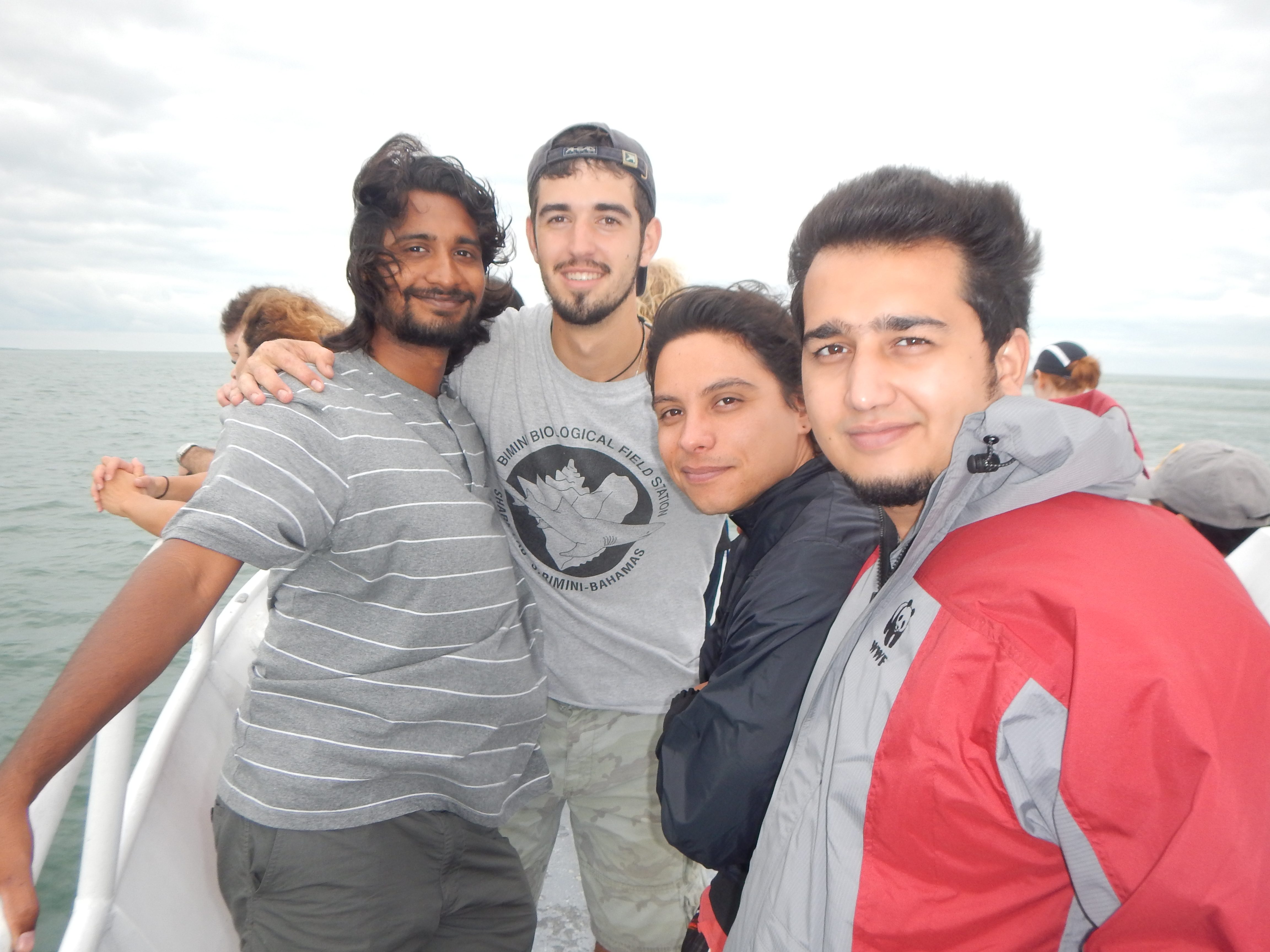 For two decades, conservation practitioners, professors, and graduate and undergraduate students from around the world have come to the Duke University Marine […] 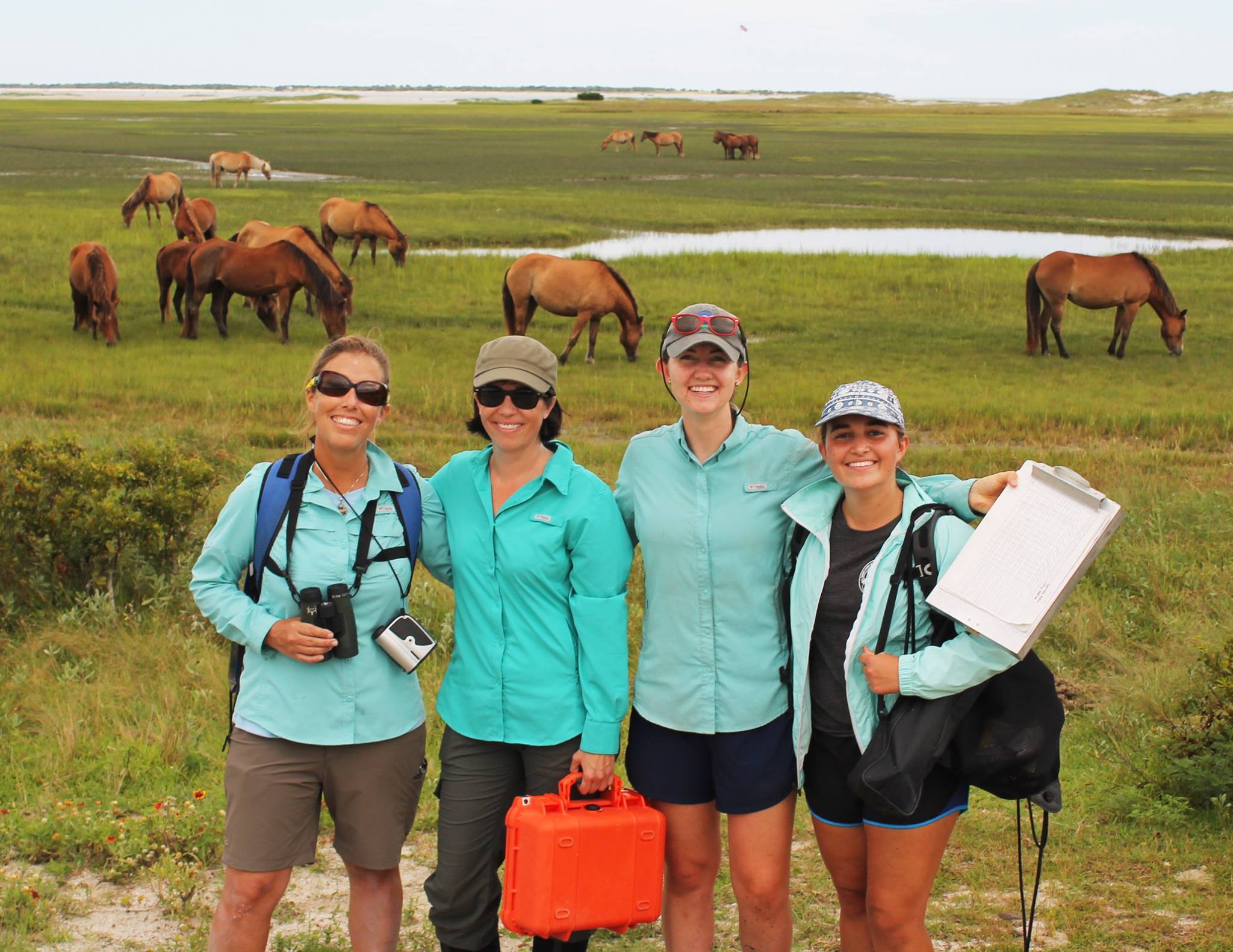 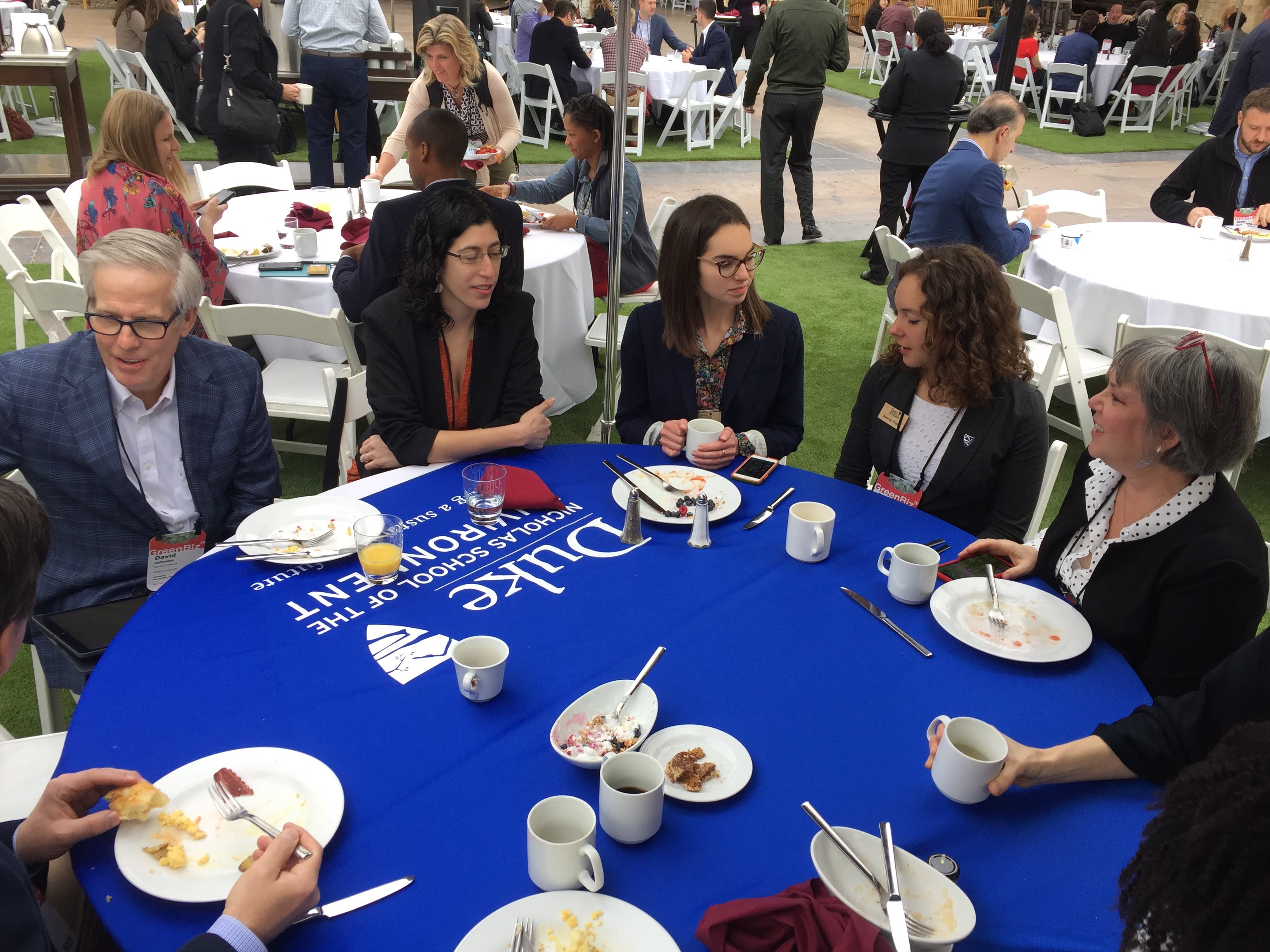 GreenBiz is the premier annual event for sustainable business leaders, and every year, students and professionals come from all over the world […]