Major Farms Cause Major Harm, But Sustainability Is On The Rise

The current models of agribusiness and meat production are detrimental to the environment. There is very little profit margin in selling food, so to maximize profit big businesses aim to maximize production. Technological advances and a profit-maximizing mentality have led the industry to adopt harmful practices. Let me give you a brief overview of what I consider to be some of the most pressing issues.

First, in order to maximize their crop yields with minimal effort big agribusinesses utilize synthetic chemical fertilizers. These fertilizers provide the plants with the nutrients they need, but they have two major faults. They convert the soil into an environment that is impossible for certain microorganisms, integral to the health of many plants, to live. The result is a vicious cycle that requires the use of more chemical fertilizer in the growing of future plants. [1]

This may not be so bad if runoff water did not collect the fertilizers as it passes over agricultural land. Through the system of streams and water pathways the runoff eventually end up in large rivers. These rivers dump water full of fertilizer into the ocean. Just as the fertilizer provides nutrients to land plants, it also feeds algae. Huge algal blooms occur in these spots that have high concentrations of fertilizer. When the algae dies and decays it creates hypoxic (low oxygen) zones that are uninhabitable for most living organisms. This can and does destroy entire marine ecosystems as exemplified by the dead zone in the Gulf of Mexico. This dead zone is approximated to cover 5,840 square miles. [2]

Another tool that agribusinesses use to maximize production is monocropping. It can more profitable for farms to produce a lot of one crop rather than lesser amounts of varied crops. This streamlines harvesting and the application of pesticides and fertilizers so that they can be carried out by machinery rather than by hand. Monocropping lowers labor costs, but planting huge fields of genetically similar (or in some instances identical) has its repercussions. This is harmful to biodiversity because it creates a space in which fewer species and varieties of both planted and naturally occurring plants can grow.[3] Rotating plants can replenish the soil of certain nutrients and lessen the need of the synthetic fertilizers that I previously discussed. 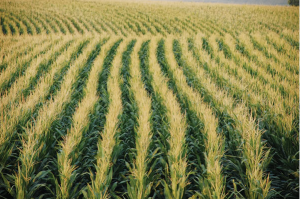 Monocropping and the lack of biodiversity that it entails make entire farms more vulnerable to pests. Due to the genetic similarity, if one plant is vulnerable to a specific pathogen or insect then so will all the others. This means that if a pest, fungus, or pathogen infects one plant it can easily rip through and kill an entire field of crops. [4]

Different plants’ roots grow to different depths in the soil. Root systems that include varied depths make it more difficult for pests to travel from one plant to the next, so it mitigates the damage a pest can do. Varied depths also limit competition between plants for nutrients in the soil. If they are taking up nutrients from different depths then more is available to each one promoting growth.  These are all reasons that polyculture (planting varied crops) produce higher yields and healthier ecosystems.[5] 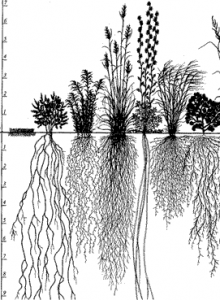 The last, and debatably scariest, issue that I want to discuss is actually a problem in meat production, not crop farming. That issue is the prodigious use of antibiotics in raising livestock. An astounding 80% of the antibiotics produced in the U.S. are administered to livestock. This is because the animals are unhealthy. Oftentimes in large meat operations they are kept in overcrowded and filthy conditions. It is also common to feed farm animals feed rather that they are not physiologically equipped to digest. These feeds increase fast weight gain rather than provide animals with nutrients they need to be healthy. Due to the feed and poor living conditions the animals need to be pumped full of antibiotics. As bacteria interacts with antibiotics strains that are only resistant strains remain, and this results in the evolution of more antibiotic resistant bacteria. These bacteria, and antibiotics are often present in the meat that humans consume. The bacteria can be a major health concern for people. Once infected humans have no way to battle antibiotic resistant bacteria.  Also, over consumption of antibiotics by people increases the risk of other similar resistant strains developing in and infecting humans directly. [6] 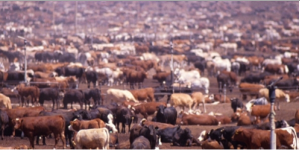 Farm animals in the U.S. produce approximately two trillion tons of waste annually. This waste contains huge amounts of undigested antibiotics and dangerous resistant bacteria. These contents are picked up by runoff water and enter the water cycle. Contaminated water is detrimental to natural processes and organisms, and is eventually consumed by humans. [7]

Though there are many harmful effects of these conventional practices, a trend of smaller sustainable farming is growing. So there is hope! This is easy to see from the statistic, “U.S. sales of organic food and beverages have grown from $1 billion in 1990 to $26.7 billion in 2010.”[8] I will not go into detail, but some examples of increasingly popular and beneficial practices are biodynamic farming, permaculture design, aquaponic systems, polyculture crop rotation, and humanely pasture raising antibiotic-free animals.