How much are emissions reductions worth?

The answer is a crucial part of deciding how much effort society should spend on preventing emissions, and how best to spend our resources. Dr. Shindell published a study documenting the environmental costs due to climate change and air pollution resulting from all the major types of emissions that contribute to both problems in Climatic Change in Feb. 2015, and spoke on the topic to the Sustainable Energy and Environment Coalition of the US Congress on April 22, 2015 (Earth Day). This work gave values that would be applicable to a wide range of cases, and also included several illustrative examples. It was covered in the media; among the best examples are a story in the Guardian and a story in Quartz.

He also published a study analyzing the value of emissions reductions for the case of transformation of the US energy and transportation sectors to very low emissions consistent with our national pledges and President Obama’s Climate Action Plan. This study, in Nature Climate Change (2016) showed that the near-term domestic benefits due to air quality improvements alone were so large that they likely outweighed the costs of the implementing such a transformation. When the long-term climate mitigation benefits were also included, benefits were ~5-10 times larger than costs. This story was also covered in the media, e.g. in the Guardian and in Newsweek.

Most recently, he led a large team of Duke and NASA researchers in a study of the value of both the air pollution and climate related benefits to health, labor, crops and the economy that would be realized in the US if the world took action to meet the goals of the Paris Climate Agreement and if only the US acted. That study, published in the Proceedings of the National Academy of Sciences of the United States, showed that when air quality-related benefits are included, the benefits of the US transitioning to an emissions trajectory consistent with keeping warming below 2C outweigh the costs even in the first decade of action and even if the US alone were to act. In contrast, the climate related benefits also outweigh the transition costs but only in the long term and only if the whole world acts. For more information see a NASA news story on the research and coverage by the Canadian Broadcasting Company (CBC).

Note that the economic value of methane reductions was also a large component of the Global Methane Assessment chaired by Prof Shindell (see “Bringing Science to Society” page for more on that).

The key results can be summarized as follows: 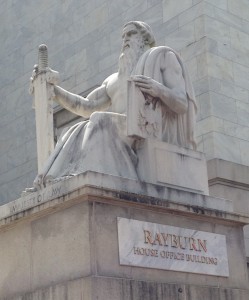 y are misleading as damages to public health, agriculture and climate are passed on to society

– We pay through our health, our health care dollars and our tax dollars

– This drastically tilts the playing field. For example, the true cost of gas is about triple the price at the pump, and electricity from coal or natural gas costs far more than solar or wind

– Society makes bad choices if we don’t know the real costs; for example, we think solar and wind are too expensive compared to fossil fuels, but really it’s the other way around

– The calculated values for environmental damages are conservative as many damages are hard to quantify and so are not included (e.g. mental health, children missing school, national security)

– Although most of the benefits of climate change mitigation take place far away in time and place, nations (and other jurisdictions) can still reap large health and crop yield gains at home by decarbonizing their economies. These can more than offset costs, making such actions warranted even without considering the benefits to the global commons.

How are environmental costs evaluated?

Society places an economic value on human health and potential future risks all the time. Sometimes this is done consciously, as when we purchase fire insurance even though the risk of fire in any single house is very small. At other times it is implicit, as when we make decisions about the need for specific safety features on cars or roadways based in part on their cost. 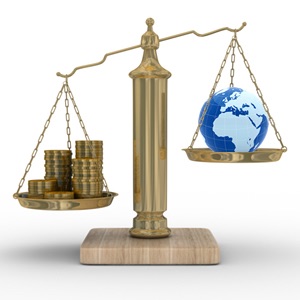 In the United States, the social cost of carbon has been used since 2009 as part of federal rulemaking to illustrate the cost of climate damages stemming from carbon dioxide emissions. In the European Union there is a market price on carbon dioxide and the other gases covered under the Kyoto Protocol to limit climate change. Likewise, the US EPA and analogous agencies worldwide often assess the damages associated with air quality. These efforts are all useful, but the climate and air quality-related valuation is done separately and is often incompatible. Furthermore, the climate related valuation is incomplete; in Europe it does not include emissions that do not fall under the Kyoto Protocol even though they are known to affect climate and for the gases included it calculates the so-called ‘carbon dioxide equivalent’ using inconsistent timescales for the physical and economic impact of the various emissions, whereas in the US only carbon dioxide is included (hence a shift from coal to natural gas can look more beneficial than it really is as reductions in carbon dioxide are offset by increases in methane emissions).

The Social Cost of Atmospheric Release

In the real world, almost any emission reduction action will affect both climate change and air quality. Hence the actual benefits to society accrue from both changes. Dr. Shindell has developed a method to calculate the value of the total impact of emissions into the atmosphere due to their affects on climate change, human health and agriculture (the Social Cost of Atmospheric Release; SCAR). This is described in a peer-reviewed, open-access paper in Climatic Change available here. An updated analysis based on improvements in understanding of several physical processes important in the environmental response to methane emissions was presented in the Faraday Discussions of the Royal Society of Chemistry in 2017 (reference below, subscription required).

The valuation per ton presented in the 2015 Climatic Change paper are designed to allow anyone to easily calculate the value of emissions changes under and policy or scenario. The metric values are in USD per ton, and are simply multiplied by the emission change in ton for each pollutant. An easy to use table of metric values can be downloaded from this link: SCAR_median_95pct_Shindell_CC_2015.xlsx.

Two illustrative examples of the application of these metrics were presented in the Climatic Change paper. One is a comparison of the costs of various types of new electricity generation in the US with and without their environmental damages. 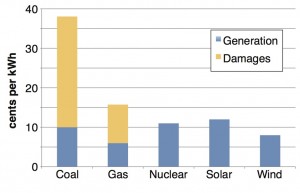 The second example is the environmental damages associated with a year’s worth of driving in the US comparing conventional gasoline-powered cars with electric vehicles. 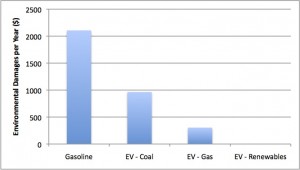 Human health and climate damages due to atmospheric emissions for typical mid-sized US automobiles, typical driving miles (based on US-specific SCAR).

A video of a presentation at Rice University’s Baker Institute in 2015 by Dr. Shindell on this topic is below.

Dr. Shindell has been involved in several other studies related to the economics of climate change. His works include: