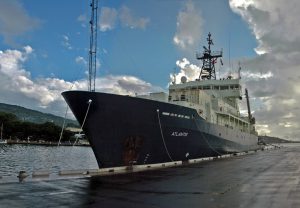 Oceanographic field expeditions especially those engaged in deep-sea research – are exciting opportunities for scientists and students to spend time together doing focused work.  The Van Dover Lab is gearing up for multiple field expeditions, including a May 2011 cruise to Barbados seeps on the R/V Oceanus  and a December 2012 cruise to Cayman Rise vents using the Remotely Operated Vehicle (ROV) Jason.  In addition, graduate student David Honig will represent our lab on the May 2011 LARISSA-related cruise to recover whale-bone moorings deployed in the Southern Ocean in February 2010.

TBD Gulf of Mexico seeps (x2, one with Alvin or Jason)

TBD Blake Ridge seeps (x2, one with Alvin or Jason)