Growing evidence suggests that the toxic effects to mitochondria from exposure to certain chemicals of interest to EPA, ATSDR, and other Superfund stakeholders can be highly persistent, and that some individuals may be more sensitive due to genetic differences. Mitochondria are the energy production centers of the cell, but also contain mitochondrial DNA, and play a role in genetic diseases.

In this project, we will test whether important Superfund chemicals and chemicals of emerging concern are mitochondrial toxicants, whether effects of exposure are persistent throughout life and into subsequent generations, whether effects are greater in some genetic backgrounds, and whether persistent alterations are associated with epigenetic changes. 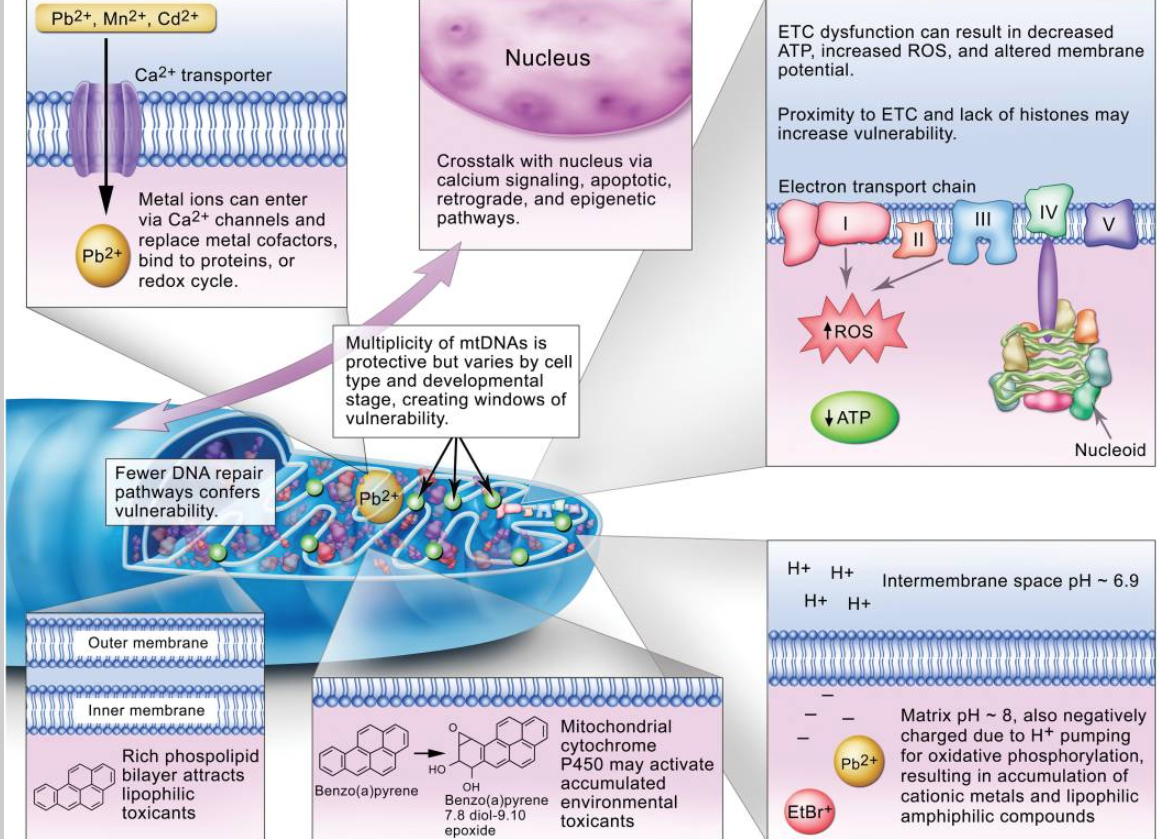 Research thus far suggests that nematodes with genetic deficiencies that prevent them from maintaining mitochondrial function are more sensitive to many, but not all, chemicals in a panel of 10 toxicants, including the Superfund chemical arsenic (Luz et al., 2017). This is an important finding because some people have similar genetic deficiencies. Our results suggest that these individuals may be particularly sensitive to exposure to arsenic (and in some cases, other chemicals).

In a collaboration with Project 2, we found that pyraclostrobin, a high-production volume fungicide, causes accumulation of fat and differentiation of fat cells by causing mitochondrial dysfunction (Luz et al., 2018). This suggests that chemicals such as pyraclostrobin and other inhibitors of mitochondrial function may contribute to rising rates of metabolic syndrome.

In collaboration with Project 4, we found that zebrafish naturally lack activity of the important enzyme cytochrome P4502E1 (Hartman et al., 2017). This information will be critical in helping researchers use zebrafish to study the many chemicals metabolized by this enzyme and to conduct further research relevant to people, because people have robust P4502E1 activity. In relation to this project, we recently organized and edited a special issue of the journal Toxicology focused on mitochondrial toxicity (Meyer and Chan, 2017), and contributed a review on the roles of various homeostatic processes in mitochondria to chemical toxicity (Meyer et al., 2017).

Our primary research questions are listed below, followed by further descriptions of our research aims for this project:

Aim 1: The main goal of Project 3 is to assess long-term mitochondrial effects of a panel of Superfund chemicals and mixtures in both wild-type (Aim 1A) and mitochondrial disease model (Aim 1B) C. elegans nematodes. We hypothesize that developmental, but not adult, exposure to Superfund and emerging chemicals and environmental mixtures will result in lifelong and transgenerational changes in mitochondria and organismal functions that rely on and reflect mitochondrial function: development, reproduction, and behavior. We will also test how existing deficiencies in human disease genes that are critical to mitochondrial maintenance and stress response will affect toxicity outcomes.

Aim 3: We also plan to test the hypothesis that chemicals causing long-term mitochondrial toxicity alter epigenetic programming and gene expression. We will test whether exposure to chemicals during differentiation (using cells) and development (using the nematode C. elegans) will cause persistent epigenetic modifications, and whether epigenetic changes could underlie persistent mitochondrial defects. We will test the functional importance of altered epigenetic patterns by transcriptomic analysis, reviewing RNA transcripts to understand differential gene expression.