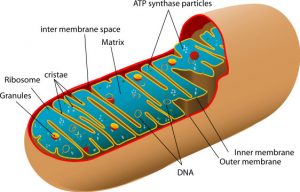 Scientists have theorized that one single, incredibly improbable event sparked a major change in the evolution of eukaryotic organisms.

The free-floating prokaryote precursor to the present-day mitochondria was engulfed by a eukaryote (a cell that contains a nucleus).  Inside the eukaryote, the swallowed-up prokaryote was not destroyed; instead, the independent cells formed an unexpected mutual symbiosis that has developed into the sub-cellular organelles known as mitochondria within eukaryotic cells.

Thanks to the prokaryotic origins of mitochondria, they have their own genome inside a double membrane barrier.  One of the primary roles of this unique organelle, aside from its role in cellular signaling, is its ability to synthesize ATP, a form of cellular energy that is available to the cell.  This is a collaborative process of many proteins.  The proteins along the membranes exchange and transport electrons, creating a proton gradient that converts of energy inputs into a useful form of cellular energy, ATP.

Advances in biological science, especially those within the past 30 years, have elucidated far greater complexity and function for the “power house of the cell,” a title introduced by Philip Siekevitz in 1957.

Part of escaping the singular functionality perception of mitochondria is recognizing that there can be thousands of uniquely shaped mitochondria in one cell.  They form a dynamic network that is dependent upon the energy demands on the cell.  Environmental conditions and cellular signaling can determine the rates of fusion, fission and mitophagy.

Mitochondrial fusion, fission, and mitophagy are responsive to environmental stressors.  Those stressors can be part of the cellular process and alter cellular signaling from the mitochondria, but some stressors, known as “mitotoxicants” (toxicants affecting the mitochondria) have been shown to contribute to mitochondrial dysfunction and diseases, such as Parkinson’s, as a result of  perturbations in mitochondrial dynamics.  The chemicals do not actually cause the mutations that inhibit fission and fusion, but genetic modification of proteins causes deficiencies in these dynamic processes and increased sensitivity to certain chemicals (see Figure 2 of Luz’s paper) (Luz et al. 2017).

Many mitotoxicants are environmental toxicants, including certain Superfund chemicals.  This emerging area of research is the basis for the Duke Superfund Research Center’s new Project 3, which addresses environmental mitotoxicant-induced mitochondrial dysfunction at critical developmental periods (reproductive age and early childhood), with the hypothesis that mitochondrial dysfunction resulting from these exposures will be transferable from parent to child.  The project uses C.elegans as a model organism due to nematode’s quick growth to reproductive maturity (about 3 days), which allows for generational studies. Another post on the Superfund blog, Into the Lab, provides additional information about the benefits of using C.elegans as an in-vivo model.