The industrial revolution was largely fueled by coal. Heavy industry, notably steel mills, provided the infrastructure for this revolution. These mills were constructed along large rivers along which coal and other materials could be easily shipped by barge from mine to mill. These rivers wound along the hilly country in areas like southwestern Pennsylvania and western Germany.  The cities along the Monongahela River Valley of Pennsylvania and the Ruhr River Valley of Germany were prime places for the steel industry. These steel mills manufactured the materials for infrastructure such as I-beams, nails, wire, and rails. Essen, Germany, was one of the country’s early hubs for the steel industry. 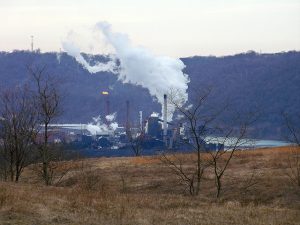 Then, starting in the 1930s and continuing into the 1940s, Germany descended into Nazism, producing death and disaster.  To defeat Nazism, the steel furnaces of Monessen and other Mon Valley towns worked at full blast. The steel mills of Essen also operated at maximum capacity. In the end, American industrial plants provided the materials for armaments to bomb the steel mills of Essen, utterly destroying them.  After Germany was defeated and the war ended in 1945, Essen was rebuilt, and today it is a thriving city with much cleaner air and more economic prosperity. In contrast, Monessen, which was never hit with bombs, began its slow decline. Over the course of a few decades the steel mills closed, and the town of Monessen became a shell of its former self. It has never been rebuilt.

The Mon Valley and the Ruhr Valley were both known for excessive air pollution. The steel mills injected many tons of particulates and gasses into the atmosphere. The hills and bends in the snaking rivers formed natural bowls which, during temperature inversions, would fill up with smoke from the smoke stacks. In October of 1948, there was a particularly severe episode in Donora, the next town over from Monessen along the Mon River. Many people became ill and died as a result. My father was a doctor there, and he and the other local doctors dealt with it the best they could.  After the smog abated, an investigation identified the steel mills as the source of the air pollution. Regulations were introduced to require the mills to diminish the pollution. But company management decided that the more cost-effective choice was to close the mills and move their operations elsewhere, abandoning the towns of the Mon Valley.  Steel production was moved to other locations, resulting in population decreases in Monessen, Donora, and the other steel towns of the Mon Valley to less than half; those who remained struggled to find opportunities to emerge from poverty. The boarded-up stores on the main streets of the Mon Valley towns still stand in silent witness to the economic disaster.

We must decrease air pollution to improve health, but in the process we also need to maintain economic vitality. When I was teenager, I worked as a stock boy at a clothing shop in Monessen. My first job each morning was to sweep the soot from the sidewalk in front of the store, so that it would not be tracked inside, a task illustrated by the common saying in the Mon Valley: “I would rather have a dirty sandwich than no sandwich at all.” This pointedly expresses the false dichotomy presented to people of Monessen and the rest of the Mon Valley, who were forced to choose between a cleaner environment and a life without poverty. A reasonable path forward can foster both a cleaner environment and a sustainable economy as illustrated by the postwar path taken by Essen, the namesake of Monessen. It is well past time to consider Monessen and her sister cities in the Rust Belt. It should not take a war’s destruction to provide the impetus to rebuild a city.

Dr. Levin is Chief of the Neurobehavioral Research Lab in the Psychiatry Department of Duke University Medical Center. He directs the Neural Behavioral and Toxicity Assessment Core and the Training Core for the Duke University Superfund Research Center.