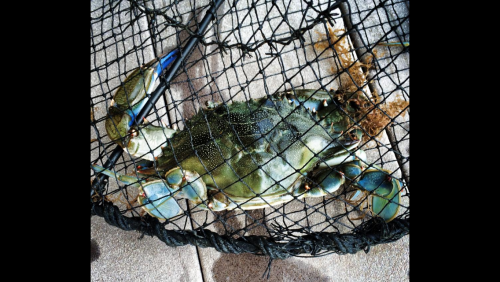 To conduct a two independent sample comparison of means test, you follow very similar steps as described in the one sample test with some modifications.  For this problem, we want to compare the average weights of blue crabs in two river basins: (1) Tar-Pamlico and (2) Neuse River.  Based on the health of the two rivers, we believe that the crabs in the Neuse will be larger, on average, and would like to test for this effect.  We randomly sample 100 blue crabs in each basin.  The mean weight of the Tar Pamlico crabs is 700 grams with a standard deviation of 300g (stp).  The mean weight of the Neuse crabs is 800 grams with a standard deviation of 400 grams (sn).  A side-by-side boxplot of the two samples is shown below. 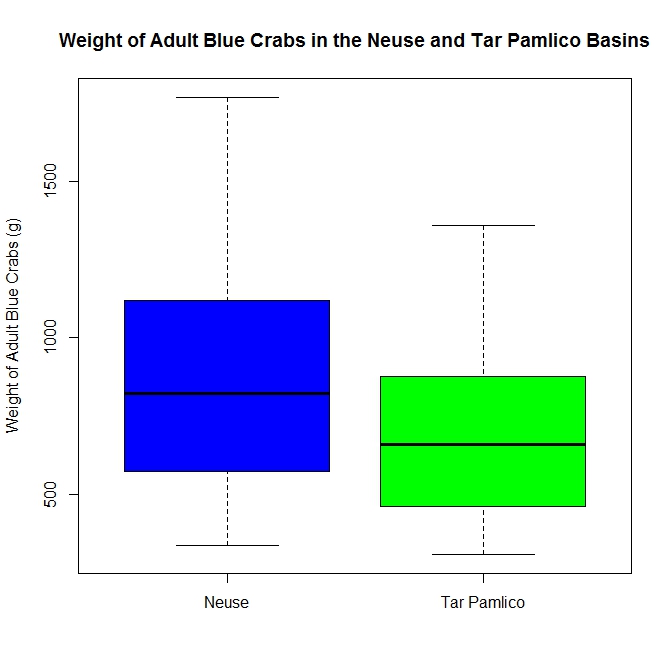 This problems illustrates a two independent sample test.  We will use the Welch’s t-test which does NOT require the assumption of equal variance between populations.

2.  Decide whether a one- or two-sided test.

3.  Examine the appropriateness of a comparison of means test (based on the assumptions)***.

Because we want to test if the Neuse crabs are larger than the crabs in the Tar Pamlico basin, we set the alternative hypothesis to state that the mean weight of crabs in the Neuse minus the mean weight of TP crabs is greater than zero.  The null hypothesis should cover all other possible outcomes.  Please note that the population parameters are used in the hypotheses and NOT the sample statistics.

5.  Decided whether a z-statistic or t-statistic is appropriate.

We do not know the true standard deviations of the weights of the crabs in the two basins.  Therefore it is most appropriate to use a t-test in this example.  If the sample size is large enough, the t-distribution will approximate the normal distribution.

7.  Calculate standard deviation of sample IF using a t-test.

As you may recall from the one sample module, the general form of a test statistic is: 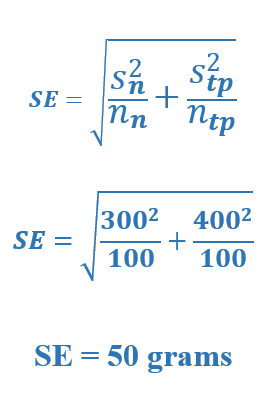 9.  Determine p-value from the test statistic using the appropriate z or t distribution.

10.  Interpret the p-value in terms of the hypotheses established prior to the test.

In a two independent sample comparison of mean test (with unequal variance), we assume the following:

1.  Populations of concern are normally distributed.

2.  Observations are independent within and between samples.

Based on our sample data, as illustrated in the boxplot above, we will assume that the two populations are normally distributed.  Because we conducted a simple random sample of crabs, we will assume that the observations are independent within and between samples.  We should test for spatial autocorrelation in our data, as crab weight might be spatially related, and therefore invalidating our results.