Home » Silliman Lab Members » Where They Are Now » Christine Angelini 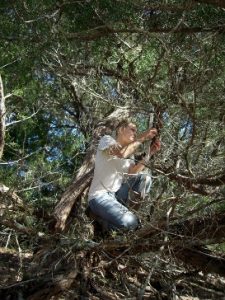 Broadly, I am interested in how the strength and direction of foundation species’ interactions vary across landscapes and through time, and the degree to which these basal interactions influence the composition and diversity of associated species. To this end, I am utilizing in two model systems, tree-epiphyte (Southern live oak-Spanish moss) assemblages and salt marshes in the southeastern United States, to explore the dynamics of foundation species’ interactions, develop general predictions about when and where they shift from positive (facilitative) to negative (competitive) and understand mechanistically how such shifts may impact biodiversity and the provision of ecosystem services.

The Southern live oak (Quercus virginiana) is revered for its charismatic, sprawling crown and valued for its dense wood that is resilient to hurricanes, fires and rot (Spector & Putz 2006). Common in mesic landscapes from Texas to Virginia and capable of growing for hundreds of years, open-grown live oaks produce broad (<20 m) canopies that provide suitable habitat for the two most abundant epiphytes in the system, Spanish moss (Tillandsia usneoides, hereafter moss) and the resurrection fern (Pleopeltis polypodioides). Although it grows on a wide range of host trees, moss thrives on sunny, dry crowns of live oaks (Callaway et al. 2002) where its festoons drape in thick clusters. Once harvested for upholstery stuffing at rates as high as 500 lbs harvester-1 day-1 (Carr 1984), moss may account for a significant portion of the net primary productivity in these ecosystems and, when it becomes dislodged during heavy rain or wind events, passively blankets the vegetation and ground below. Despite its widespread distribution, very little is known about how the relative load of moss (zero to high loads) affects the growth of live oaks, from the germination of acorns in the understory to the persistence of established mature individuals, or how sustaining moss loads might influence a live oak’s ability to stave off competitors. Using manipulative field experiments, large-scale surveys and correlative studies, my research is geared toward understanding how moss may mediate the growth of young oaks as well interact with faster-growing, encroaching species. By elucidating the relative costs and benefits of hosting Spanish moss over the ontogeny of a live oak, I strive to improve the management of historically oak-dominated maritime forests that are facing widespread shifts in species composition due to a combination of over-harvesting, fire and elevated grazing intensity.

Over the past decade, salt marshes throughout the southeastern United States have experienced extensive die-back of cordgrass (Spartina alterniflora), the dominant species in the ecosystem, due to a combination of drought stress and intense grazing by the periwinkle snail (Littoraria irrorata). Where swaths of cordgrass have receded, the denuded marsh surface is exposed to intense evaporative stress in the summer months, which drives up soil salinities and hardens the marsh substrate. These harsh physical conditions appear to be inhibiting the recolonization of cordgrass and facilitating the expansion of the competitively inferior, but stress-tolerant succulent forb, Salicornia virginiana, into these die-off zones. The purpose of my research is to investigate the competitive dynamics between Spartina and Salicornia and the community-wide (faunal distribution and abundance) repercussions of this transformation. Using field experiments and observational studies, I aim to develop a predictive understanding of how drought (salinity), grazing intensity and interspecific competition interact to drive patterns in vegetation cover and community composition in these critical coastal ecosystems.