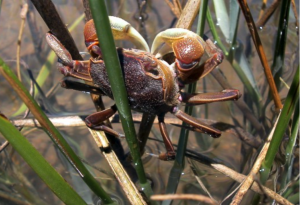 Over the past 11 years and during the next 5, I have examined and will continue to test the generality of top-down control in salt marshes in New England, Argentina, Californian, Chile, Brazil, China, New Zealand, and South Africa. This work has already resulted in 23 publications (e.g., in Ecology, J. Ecology, Ecology Letters, Ecological Monographs) and reveals that intense consumer control is not a biogeographic anomaly of U.S. southern marshes but, instead, a worldwide phenomenon. This work also indicates that the worldwide decline in marine predators is contributing to increased grazer control in these systems, as it unleashes potent grazers from top-down control (He and Silliman 2016, Ecol. Monographs). Most recently, our work on salt marshes in temperate China (He, Silliman, et al. Ecology Letters) has revealed that grazing crabs can eliminate drought-stressed vegetation that could otherwise survive and recover from the climate extreme, transforming once lush marshes into persistent salt barrens. This is the first direct experimental demonstration for the obligatory role of top-down forcing across the initiation, expansion and recovery stages of a natural ecosystem’s collapse. It highlights that top-down factors should no longer be considered ancillary to the primary force of drought but indeed a likely powerful counterpart that cannot only act additively to kill ecosystems but also suppress their recovery after drought subsides. This finding has implications for the resilience of ecosystems worldwide to drought.

We also performed a global synthesis to test for the generality of top-down forcing in coastal wetlands including both salt marshes and mangroves. By synthesizing 1748 measures of consumer effects reported in 443 experiments/ observations on all continents except Antarctica, this work (He and Silliman 2016, Ecol. Monographs) reveals that top-down control is indeed general across a wide range of salt marshes globally. It also reveals potential generality of top-down control in mangroves. By synthesizing results of studies that factorially manipulated presence of consumers and environmental factors relevant to global change, this work further found that across a range of studies and salt marshes, nutrient, disturbance, and flooding often amplify the negative effects of herbivores on salt marsh plants.

If top-down control is prevalent across a range of salt marshes and mangroves, the next question is whether top-down control varies geographically. Theory has long predicted that herbivore pressure is more intense at lower than at higher latitudes. Analyzing how top-down control varies across latitude, we found that top-down control by endothermic vs. ectothermic herbivores varied differentially across latitude (He and Silliman 2016, Ecol. Monographs). Along latitudinal gradients, increased temperature enhances the negative effects of ectothermic herbivores, but has no effect on endothermic herbivores. This finding highlights the value of incorporating thermoregulation strategy into future models that predict the impact of rising temperature on trophic interactions. We also investigated if the effect of nutrient enrichment on top-down control varies geographically (He and Silliman 2015, Ecology Letters). We found that fertilization strongly increases herbivory in salt marshes, but not in mangroves, and that this effect increases with increasing latitude in salt marshes. The mechanism likely underlying this pattern is that nutrient enrichment has stronger effects on plant nitrogen concentration at higher latitudes and that higher increases in plant nitrogen concentration generally lead to higher increases in herbivory. This work provides a mechanistic understanding of how eutrophication affects plant–herbivore systems predictably across broad latitudinal gradients, and calls for incorporation of biogeography into understanding large-scale variability in the impact of environmental change.