I am pursuing a PhD in Marine Science and Conservation in the Nicholas School of the Environment at Duke University.  Before beginning my doctoral studies, I earned a MS in Marine Science from Moss Landing Marine Laboratories and a BS in Zoology from the University of Florida.  My research interests include the ecology, behavior, and conservation of apex marine predators, such as marine mammals.  I am interested in understanding how oceanographic and environmental variability influence the distribution of mid-trophic level prey species, and ultimately how these factors influence the abundance, distribution, and movements of top predators.  For my dissertation research, I will document the effects of prey type, patch size, and density on the fine scale foraging behavior of large whales in both space and time.  I hope to gain insight into the role apex predators play in marine ecosystems so we can make informed decisions on how to best conserve and protect our marine resources.  My ultimate goal is to earn a position in academia or with a government agency where I can impact management and conservation strategies through my research and work closely with students to help educate and inspire future generations of marine biologists. 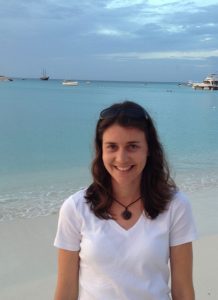 I am currently pursuing a PhD in Ecology in the Nicholas School of the Environment at Duke University. My research interests are broadly focused on using passive acoustic monitoring methods to study cetacean ecology. My dissertation research examines spatial and temporal patterns in the occurrence and distribution of sperm whales (Physeter macrocephalus) and beaked whales (family Ziphiidae) in the western North Atlantic, based on long-term passive acoustic monitoring off the east coast of the U.S. and Canada. Prior to beginning graduate studies at Duke, I received a B.S. in Marine Biology from the University of California Santa Cruz, and subsequently worked for the Protected Species Branch at the NOAA Northeast Fisheries Science Center in Woods Hole, Massachusetts, where I was involved in several passive acoustic research projects investigating seasonal patterns and movements of cetacean species and the effects of anthropogenic noise on cetacean communication.Publications 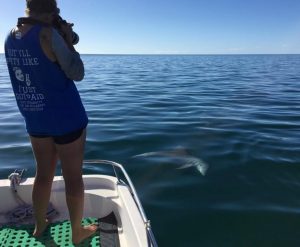 I am a PhD Candidate in Marine Science & Conservation at the Duke University Marine Lab. I am generally interested in how ecology and evolution shape social behavior in marine mammals. My dissertation research examines how genetic and environmental factors interact to produce complex social behavior in bottlenose dolphins in Shark Bay, Western Australia. I am a National Science Foundation Graduate Research Fellow and collaborate with the University of the Sunshine Coast, Queensland, Australia on the genetics project through the NSF GROW program. I am additionally involved in research on ecotourism management in Shark Bay with the West Australian Department of Parks and Wildlife.

Before starting at Duke I received a B.Sc. degree in Biology at Georgetown University, completing a thesis investigating the factors that contribute to variation in maternal care in bottlenose dolphins. I subsequently worked as a Research Associate for the Shark Bay Dolphin Project, conducting field work and maintaining the project’s shared database. 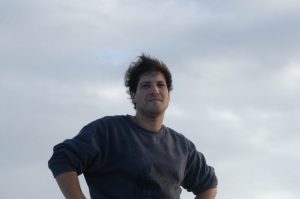 I am broadly interested in behavioral ecology of cetaceans. In particular, I am curious about individual and population level variation in foraging strategies, social structure, migration, reproduction, and stress. For my dissertation, I am examining how some of these parameters may have changed over the 20th century for fin whales due to large disturbances such as commercial exploitation of the whales themselves and overfishing of prey species.

I am currently pursuing a PhD in the University Program in Ecology at Duke. Previously, I completed a MS in Marine Biology at the University of Massachusetts Dartmouth where I studied fin whale social behaviors. I have also worked on bottlenose dolphin social structure and assisted on a couple of behavioral studies of North Atlantic right whales. 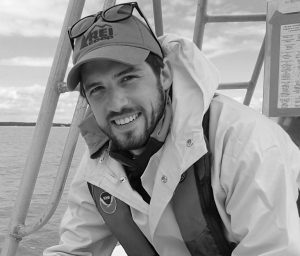 Seth is broadly interested in high seas governance, protected areas designation and the conservation of large marine megafauna such as sea turtles and cetaceans. More specifically, his research is focused on Antarctic governance and conservation, mainly how protected areas are negotiated, designed, and established, and using spatial management techniques to ensure that fisheries do not threaten the long-term stability of marine biodiversity. Prior to this, he worked for NOAA Fisheries on regulatory policy and marine mammal conservation, for the World Wildlife Fund, where he managed a Caribbean sea turtle conservation project, and also for the U.S. Department of the Interior on climate change adaptation issues.

Seth also holds two Masters’ degrees in Public Policy (environmental policy & human security) and Conservation Biology from the University of Maryland, and bachelors’ degrees in geography (biogeography & human geography), political science (with a focus on international security and the Middle East), and French from Slippery Rock University of Pennsylvania. He has also spent significant time living in France, England, South Korea, India, and the Caribbean, as well as traveling throughout the Middle East (Turkey, Egypt, Lebanon, etc.) and studying Arabic in North Africa (Tunisia) with the U.S. Department of State. In his spare time, Seth plays soccer, scuba dives, plays frisbee, rides horses, works on photography, and obsessively reads the news. 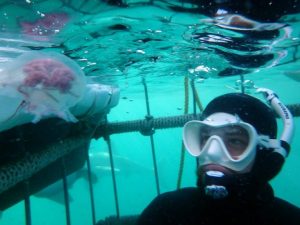 I am a second year PhD student in Ecology at the Duke University Marine Lab. I am generally interested in applying and testing ecological theory in natural animal communities, and using these insights to inform conservation problems and interactions between humans and wildlife. My current focus is on the behavioral and community ecology of marine predators that interact with commercial fishing operations. My dissertation examines an interaction between longline fisheries and several toothed whale species that remove catch directly from fishing gear, a phenomenon known as depredation. I am addressing this problem using several complementary approaches including animal movement/foraging ecology, spatial analysis, bioenergetics, and a social-economic approach to explore impacts on the fishing industry and possible policy implications.

Before beginning my studies at Duke I completed B.A. degrees in Biology and Psychology at St. Louis University and an M.Sc. degree at Illinois State University where I studied the behavioral ecology of invasive, container-dwelling mosquitos. I have also worked as a field biologist in the southwestern US and as a commercial fisheries observer for the National Marine Fisheries Service on longline vessels in Hawaii and trawl vessels in the Bering Sea and Gulf of Alaska. 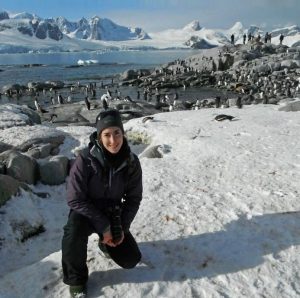 I am a first-year PhD student in Ecology at the Duke University Marine Lab. I am broadly interested in the foraging ecology of marine mammals, particularly any novel or social foraging behaviors, and how we can measure their foraging success and effort. I would like to combine data from multiple sources, including animal-attached tags and aerial observations from autonomous vehicles to have a more complete understanding of their behavior. I am also interested in the effects of noise on marine mammals, and understanding how human activities may affect foraging behavior.

Before coming to Duke I completed a Bachelor of Science in Biology from Georgetown College (KY) and a Masters of Research in Marine Mammal Science from the University of St Andrews (Scotland). My masters research focused on the foraging ecology of short-finned pilot whales using acoustic and movement recording tags (DTAGs). We used fine-scale metrics to characterize foraging behavior in a population of pilot whales that performs unique sprinting dives. After completing my masters I worked as a research assistant for the Sea Mammal Research Unit at St Andrews, where I used DTAGs to study echolocation behavior in a variety of species of cetaceans, from harbor porpoises to beaked whales. As part of these projects I analyzed and interpreted echograms, visual representations of echolocation clicks and the echoes returning from prey items, to determine the animal’s foraging success and make inferences about prey behavior. 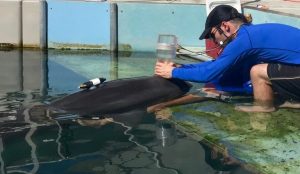 My research interests are focused on improving our understanding of how anthropogenic and natural disturbances impact marine mammals. Effective policy requires accurate models. I’m interested in combining metabolic rate measurements of cetaceans in zoological facilities, with fine-scale and longer-term tags on wild cetaceans, to improve predictions of the metabolic costs of different activities. Ultimately, I plan to enhance cetacean population models by refining vital population parameters.

I’m also interested in the differences between shallow and deep diving populations of the same species. Deep-diving cetaceans belonging to “offshore” ecotypes are very different behaviorally, morphometrically, and physiologically from their shallow-water counterparts. I hope to explore the natural history questions surrounding such adaptations, as well as increase our knowledge base to inform policy decisions surrounding offshore cetaceans.

Before beginning my PhD in Marine Science and Conservation, I obtained a BBA from the College of William and Mary, where I researched the impact of bycatch reduction devices on the recreational blue crab fishery, with the goal of reducing diamondback terrapin bycatch. I obtained a Masters of Environmental Management from Duke’s Nicholas School of the Environment. At Duke, I explored the overlap of prey species among short-finned pilot whales and several tuna species, as part of a study examining marine mammal bycatch in pelagic longline fisheries. I also conducted microplastic ingestion experiments with a local coral species; results suggest that taste may be an understudied driver of plastic ingestion in a number of phyla. 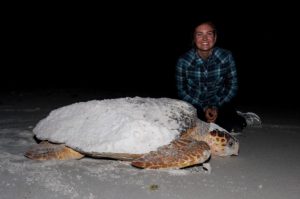 I am currently a second-year Master of Environmental Management candidate with a concentration in Coastal Environment Management at the Nicholas School of the Environment. I am broadly interested in the impacts of ocean noise (especially seismic testing) and marine debris on marine megafauna, particularly sea turtles and cetaceans. I have a particular interest in approaching these issues from a policy and legal perspective, and looking at the tools under the Endangered Species Act, Marine Mammal Protection Act, and other statutes to address these issues. For my master’s project, I am largely analyzing the effectiveness of critical habitat designations under the Endangered Species Act for marine mammal recovery. While at Duke, I have also worked on several projects related to seismic testing in the U.S. and its impacts on marine mammals and turtles.

Prior to attending the Nicholas School, I worked as an editor at Oceana, where I wrote articles daily on climate change, fisheries policy, and seismic testing—and is undoubtedly where my fascination and concern with seismic testing began. I’ve also written for the Natural Resources Defense Council, the National Audubon Society, and the Huffington Post, and held several field positions monitoring shorebirds and nesting sea turtles.