The first field season of our 2019 Atlantic Behavioral Response Study (BRS) is underway.  The primary objective of our field work is to examine the behavioral response of Cuvier’s beaked whales to tactical mid-frequency active sonar (MFAS) signals. We use Controlled Exposure Experiments (CEEs), in which the received levels of these signals are carefully calibrated, to examine the response of these whales to the MFAS signals. 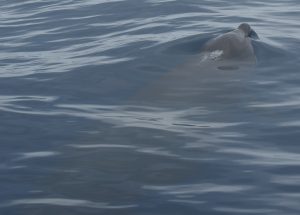 The secondary objectives of our work include conducting CEEs with short-finned pilot whales and, when Navy vessels are unavailable, conducting CEEs with simulated sonar signals. Our field work is conducted off Cape Hatteras, which holds one of the densest concentrations of beaked whales in the world.  So far, we have been experiencing typical early season weather – lots of wind and unsettled conditions. We have managed two full field days – May 8 and 11 – and are concentrating on deploying satellite-linked dive recorders on our two focal species prior to conducting CEEs. 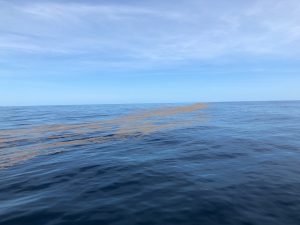 Strong thermal front on the west side of the Gulf Stream off Cape Hatteras – marked by lots of Sargassum and a five-degree increase in sea surface temperature.

We had fairly good conditions on our first field day, but were hampered by a large northeast swell, which complicated searching for beaked whales. Sea conditions were better west of the Gulf Stream, due to a northerly breeze that was blowing against the current in the Stream itself. The western edge of the Gulf Stream was marked by a very strong thermal front, with sea surface temperatures 5°C warmer in the Stream than outside it. The front was marked by long lines of Sargassum. 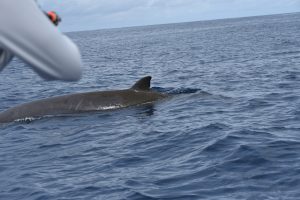 Daniel Webster preparing to deploy a satellite-linked dive recorder on a well-marked Cuvier’s beaked whale off Cape Hatteras on May 11th, 2019. Photo by Will Cioffi.

We found one young male beaked whale just before lunchtime and stayed with him over a deep dive that lasted almost an hour. We relocated him after the long dive but then lost him in the swell without approaching closely enough to attempt to deploy a tag. 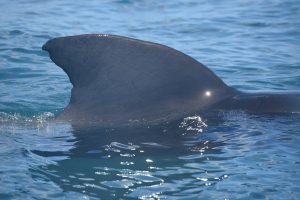 We deployed a satellite-linked dive recorder on this large male short-finned pilot whale in a mixed group with Risso’s dolphins on May 8th, 2019.

Towards the end of the day we encountered a mixed aggregation of Risso’s dolphins and pilot whales and deployed a tag on a very large male pilot whale. Danielle Waples, who curates our photo-ID catalogs, was able to match this male pilot whale – he was first seen off Cape Hatteras in 2007, making this one of our longest sighting records. He has also been seen by our colleagues from HDR at Norfolk Canyon. 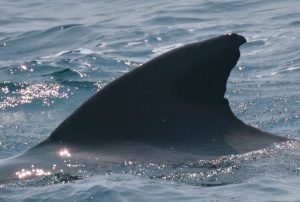 We first photographed our satellite-tagged pilot whale twelve years ago off Cape Hatteras. Photo from 2007 by Danielle Waples.

On our second field day we experienced moderate conditions and our tagger, Daniel Webster, managed to deploy two tags on Cuvier’s beaked whales. We saw several well-marked whales and Danielle and Will Cioffi will be matching our field photos to our catalog in the coming days. Interestingly, we encountered the pilot whale we tagged three days earlier and discovered that he had shed his tag.

The tagged whale three days later – without his tag. Photo by Will Cioffi.

One of the benefits of working off Cape Hatteras is all of the other marine wildlife that congregates in the area. On our first field day we were visited by several Pomarine jaegers, which approached the boat very closely. We also had quite a few sightings of black-capped petrels – our colleagues from Clemson are tagging these endangered seabirds just south of our field site, and we hope to see some of their tagged birds. On our way in at the end of the first field day we passed more than a dozen large loggerhead sea turtles sunning themselves at the water’s surface. 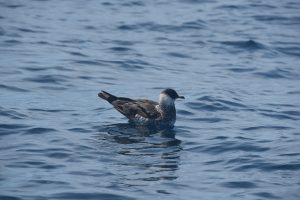