We have just wrapped up field work in the first phase of the 2018 Atlantic Behavioral Response Study. We’ll take a month off and then start again in the middle of July with a new round of tag deployments and Controlled Exposure Experiments (CEEs). 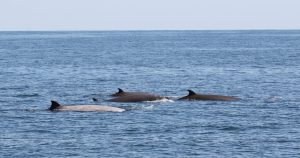 A group of seven Cuvier’s beaked whales surfaces off Cape Hatteras. Photo by Will Cioffi.

On June 13th we conducted our second CEE of the year with a Navy destroyer, this time the USS Ramage.   Unfortunately, it was too rough to send the RV Barber offshore, but our intrepid field crew managed to located Zc69, our focal Cuvier’s beaked whale, from a charter vessel on the morning of the experiment. We were able to locate the whale just before the start of the CEE, giving us an exact position of the whale (position estimates from the satellite tag can be unreliable) and allowing us to measure received sound levels near the whale – at least at the surface.

Zc69 really needs to brush his teeth. Male Ziphius use their teeth as weapons and they are adorned with rabbit-eared whale barnacles, Conchoderma auritum. Photo by Heather Foley.

In the days following the CEE we managed to get offshore to find Zc69 and his associates again and to see some of our satellite tagged pilot whales. Relocating these animals allows us to assess potential changes in social associates, to check on the satellite tags, and to obtain biopsy samples from the focal whales. 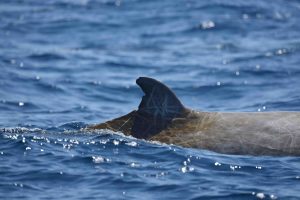 Zc69 has a very distinctive dorsal fin, in addition to his unique patterning of scars from encounters with other male whales. The satellite tag is located in the center of the dorsal fin. Photo by Will Cioffi.

On our last day of field work we encountered a group of seven Cuvier’s beaked whales that allowed us to approach on several surfacings. We collected three biopsy samples from this group of whales. 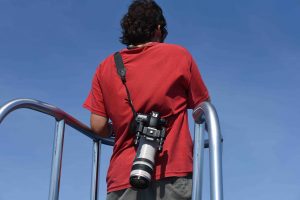 Will Cioffi scans for beaked whales, camera at the ready.

So now it’s time to rest up, conduct some preliminary analysis, and prepare for the second phase of the 2018 Atlantic Behavioral Response Study, which will begin in mid-July. Stay tuned for more updates!