Despite more unsettled weather, we made significant progress on the Atlantic BRS project this past week. We spent three very long days on the water with two, and sometimes three, boats working about 40 miles from shore.  Our field days begin at 4:30 in the morning and often don’t end until after 9:00 PM.  On the first day of field work, May 22, we deployed a satellite tag on a short-finned pilot whale, despite fairly poor working conditions. 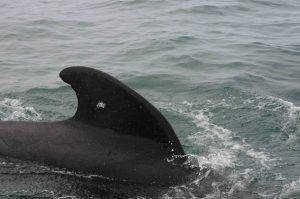 Short-finned pilot whale equipped with a satellite-linked transmitter deployed off Cape Hatteras on May 22nd.

On May 24, we had better conditions and deployed two more tags on pilot whales and our first satellite tag on a Cuvier’s beaked whale in 2018. Working with beaked whales is particularly challenging because of their extreme diving behavior. After a foraging dive of an hour or more, these whales spend only a couple of minutes at the surface before submerging again for a series of shorter dives that can last 20 to 30 minutes. Each surfacing is very short, so we spend a lot of time checking our watches and scanning the horizon for whales while one crew member monitors the receiver.  It’s remarkable that we can get close enough to obtain photos, let alone deploy a tag. 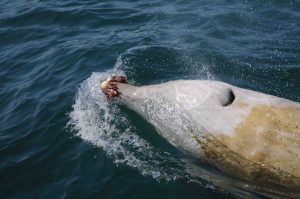 Adult male Cuvier’s beaked whale off Cape Hatteras. Note the two teeth at the distal tip of the lower mandible, which erupt only in adult males. The teeth are covered with barnacles and are used in agonistic interactions with other males.

On May 25  we had a good weather forecast and employed all three boats: the Kahuna, which serves as our base of operations and deploys the sound source; the Barber which focuses on tagging beaked whales; and the small Exocetus, which was responsible for deploying a digital archival tag (DTAG) on a pilot whale.  We successfully deployed a DTAG on a pilot whale (in a social group with a satellite tagged individual) and conducted a focal follow while we conducted a controlled exposure experiment with the source from the Kahuna. Meanwhile, the Barber deployed another satellite tag on a beaked whale. 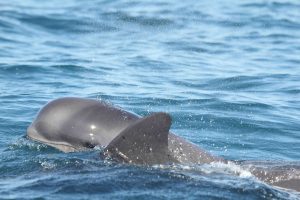 All went according to plan until the weather picked up late in the day and the DTAG failed to jettison from the pilot whale as planned. We can program small burn wires on the DTAG to release the suction cups that attach the tag to the animal – but for some reason the tag did not jettison as planned. Due to worsening weather conditions, we were forced to leave the tagged pilot whale late in the day. We searched for the DTAG the following day without success, but still hope to recover it in the next round of field work – the DTAG has a VHF radio beacon that allows us to relocate it at sea once it is released. 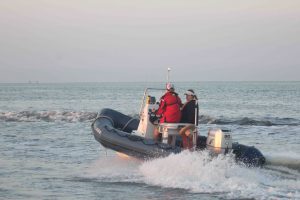 We are planning more field work this coming week, as we wait for the rain and wind associated with tropical storm Alberto to pass. Hopefully we’ll find the DTAG this week.