Orrin is James B. Duke Professor Emeritus of Geology, Division of Earth and Ocean Sciences, in the Nicholas School of the Environment at Duke University, and Founder and Director Emeritus of the Program for the Study of Developed Shorelines (PSDS – http://www.psds-wcu.org/) which is currently based at Western Carolina University.

Pilkey began his career with the study of abyssal plains on the deep-sea floor.  As a result of the destruction of his parents’ house in Waveland, Mississippi, during Hurricane Camille (1969), he switched to the study of coasts, a field in which he is well known internationally.  His research centers on both basic and applied coastal geology, focusing primarily on barrier island coasts.  Early-on, he co-edited (with William Neal, Professor of Geology at Grand Valley State University) and co-wrote a 22-volume Living with the Shore series of books, intended to inform the public about the hazards of beachfront living.  In 1996, Pilkey and Kathy Dixon co-authored The Corps and the Shore, a critical view of the U.S. Army Corps of Engineers’ projects on American coasts.  In the book Useless Arithmetic (2007), written with his daughter, Linda Pilkey-Jarvis, they contend that the outcome of natural beach and barrier island processes cannot be accurately predicted (for engineering purposes) by mathematical models.  The Rising Sea, written with Rob Young in 2009, focuses on the global threat from sea level rise.  The World’s Beaches (2011) is an informative “Global Guide to the Science of the Shoreline” that looks at the role of beaches in history, beach classifications, threats that beaches face today, and the future of beaches in a rising sea. Beautiful batik art by Mary Edna Fraser embellishes Global Climate Change: A Primer. This popular 2011 volume was co-authored with Orrin’s son, Keith, and provides an excellent discussion of the subject, along with debunking climate change myths.  Pitfalls of Shoreline Stabilization (2012) offers a global view of the pluses and minuses of holding shorelines in place during a time of rising sea level.  In The Last Beach (2014), with Andrew Cooper, Professor of Coastal Studies in the School of Environmental Sciences at the University of Ulster, the authors discuss the grim future of beaches and the challenges of saving beaches. The 2016 volume, Retreat from the Rising Sea: Hard Decisions in an Age of Global Climate Change, co-authored with his daughter, Linda Pilkey-Jarvis, and son, Keith Pilkey, focuses on sea level rise and the need to retreat or move back off the shore. A second book published in 2016 is Lessons from the Sand: Family-Friendly Science Activities You Can Do on a Carolina Beach. This beautifully illustrated book by Pilkey and his son, sculptor/artist Charles Pilkey, features more than forty fun, hands-on activities for families with children and reveals the science behind the wonders found on the beaches of North and South Carolina. A new book by Pilkey and son Keith is currently in progress (2018).

Pilkey has received numerous awards, among them the Francis Shepard medal for excellence in marine geology (1987), a number of public service awards from various organizations, and the Priestly Award (2003).  In 2012, Duke University honored him with the naming of a building at the Duke Marine Lab in Beaufort, NC:  the Orrin Pilkey Marine Sciences and Conservation Genetics Center.

In addition to his work on books, Orrin has published more than 250 technical publications [some can be found at https://psds.wcu.edu/publications/archived-publications/].  Additional articles by Pilkey can be found in the Coastal Care web pages, a site that focuses on coastal and beach issues and education.  http://coastalcare.org/   A number of his op-eds on the subject of response to coastal erosion and sea level rise have been published. He is a popular speaker at meetings and events and has appeared in documentaries, including Shored Up (2013) (a film regarding climate change, beaches, and their relationships; produced and directed by Ben Kalina), and Sand Wars (2013) (a film based on the mining of sand from beaches; produced by Guillaume Rappeneau and directed by Denis Delestrac), as well as the original eye-opening film, The Beaches Are Moving (1992), a 1-hour North Carolina PBS production, produced by Michael Sheehan. 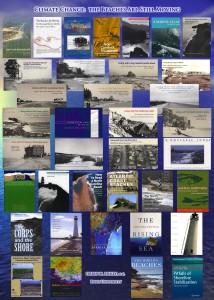 Pilkey, O.H., 2000. What You Know Can Hurt You: Predicting the Behavior of Nourished Beaches.

Pilkey, C.O., and O.H. Pilkey, 2016. Lessons from the Sand: Family-Friendly Science Activities You Can Do on a Carolina Beach. Chapel Hill: University of North Carolina Press. 221 p.