In 2005, the Energy Policy Act (EPAct) gave the Secretary of the Interior, and thus the Bureau of Ocean Energy Management (BOEM), the authority to issue leases for developing renewable energy projects on the Outer Continental Shelf (OCS). BOEM has to comply with several stipulations when overseeing projects on the OCS; projects must be developed in environmentally responsible ways, must consider other uses of the OCS, and BOEM must coordinate with relevant federal agencies and state and local governments[1]. Taking these things into account, the regulations for the Outer Continental Shelf Renewable Energy Program were finalized in 2009, and provide a framework for permitting activities on the OCS pertaining to energy from renewable sources[2]. Offshore wind energy, ocean wave energy, and ocean current energy are of particular interest to BOEM. As climate change becomes more of a topic of interest and as the world begins to explore more options in renewable energy, offshore wind energy seems like a promising option; wind turbines have been installed offshore in several European countries. In the United States, offshore wind has the potential of producing over 4,000 gigawatts of energy[3]. So why haven’t we seen wind farms popping up along our coasts since 2009? Part of the issue lies in the complexities, rigidity, and length of the regulatory process. 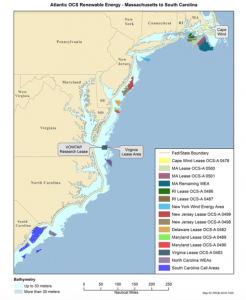 Currently, BOEM utilizes a four-phase process in authorizing offshore wind development including the planning phase, leasing phase, site assessment phase, and construction and operations phase. The process begins when a state expresses interest in developing offshore wind energy resources, and includes the establishment of an Intergovernmental Renewable Energy Task Force made of stakeholders (Tribes, States, natural resource agencies, and government entities) who are involved throughout the process[4]. During the planning phase, BOEM conducts environmental compliance reviews and consults with stakeholders to analyze the potential for wind energy. If it seems like a viable option, then a lease is issued so that the state can begin planning site assessment. No one can build anything yet, but they may collect data for up to five years and complete an environmental assessment for survey work[5]. Then a site assessment plan (SAP) is submitted. For an offshore wind farm, an environmental impact statement must be completed at this stage; this could take eighteen months to two years and requires more consultations. Once the SAP is approved, the developer can begin actually assessing the site for the potential to support an offshore wind farm. Finally, after assessing the site, a construction and operation plan (COP) is submitted that details plans for building and operating the wind energy project[6]. 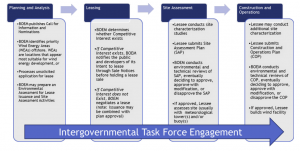 BOEM’s regulatory process for renewable energy on the OCS.

The National Offshore Wind Strategy published by the Department of Energy and Department of the Interior in 2016 outlined the benefits of offshore wind in the United States and three themes describing ways to facilitate development of the offshore wind industry. One of these strategic themes is “Supporting Effective Stewardship,” which includes ensuring that the regulatory process is efficient, consistent, and clear[7]. It is clear that the leasing process involves many steps and can take a great deal of time to progress from start to finish. The process also involves several agencies aside from BOEM (the Army Corps of Engineers, US Coast Guard, NOAA, etc), many of which have their own applications to be completed. While it may seem like an easy fix to have a “one stop shop” for permitting and leasing like European countries have, this would be difficult to enact in the United States since all agencies are defined and governed by different laws and mandates. However, to improve communication, steps are being taken to make the plan-review process more transparent and make it easier to align the several agencies involved, even at different levels of government. BOEM has plans to use Title 41 of the Fixing America’s Surface Transportation Act, which requires the facilitating of a major infrastructure project to establish and publicly track the plan for coordination purposes of federal authorizations and environmental reviews[8]. This will be used to track COP reviews.

Perhaps the second most important aspect of the process that would make offshore wind a more viable industry in the United States would be to allow for some flexibility in the process. If technology changes or a plan is not reviewed in time, a developer must start back at the beginning of the process. If there were a way to be more flexible given changing technologies, maybe fewer developers would shy away from implementing offshore wind.