Offshore Wind Incentives and the RPS

As the quest for energy diversification and lower greenhouse gas emissions persists, renewable sources continue to make up an increasingly larger portion of American energy. Although still in its infancy, offshore wind’s proximity to large demand centers in coastal populations and technical potential for sizeable energy production make it a renewable energy source I believe Americans should continue to pursue. While the DOE and DOI suggest offshore wind has a resource capacity of nearly 2,058 GW with current technology alone, high capital costs and a long, complex permitting process diminish incentive to pursue it (Energy and Interior). After acknowledging these barriers, offshore wind’s implementation is reliant upon proper incentives that encourage the source’s energy generation and distribution. Some incentives are financial like investment tax credits issued by Congress or project grants from the Department of Energy. Others are legislative requirements like state renewable portfolio standards. When thinking about today’s political climate and environmental legislation, I believe state renewable portfolio standards are offshore wind’s strongest and most affective incentive to become relevant and prevalent in the electricity generation market. 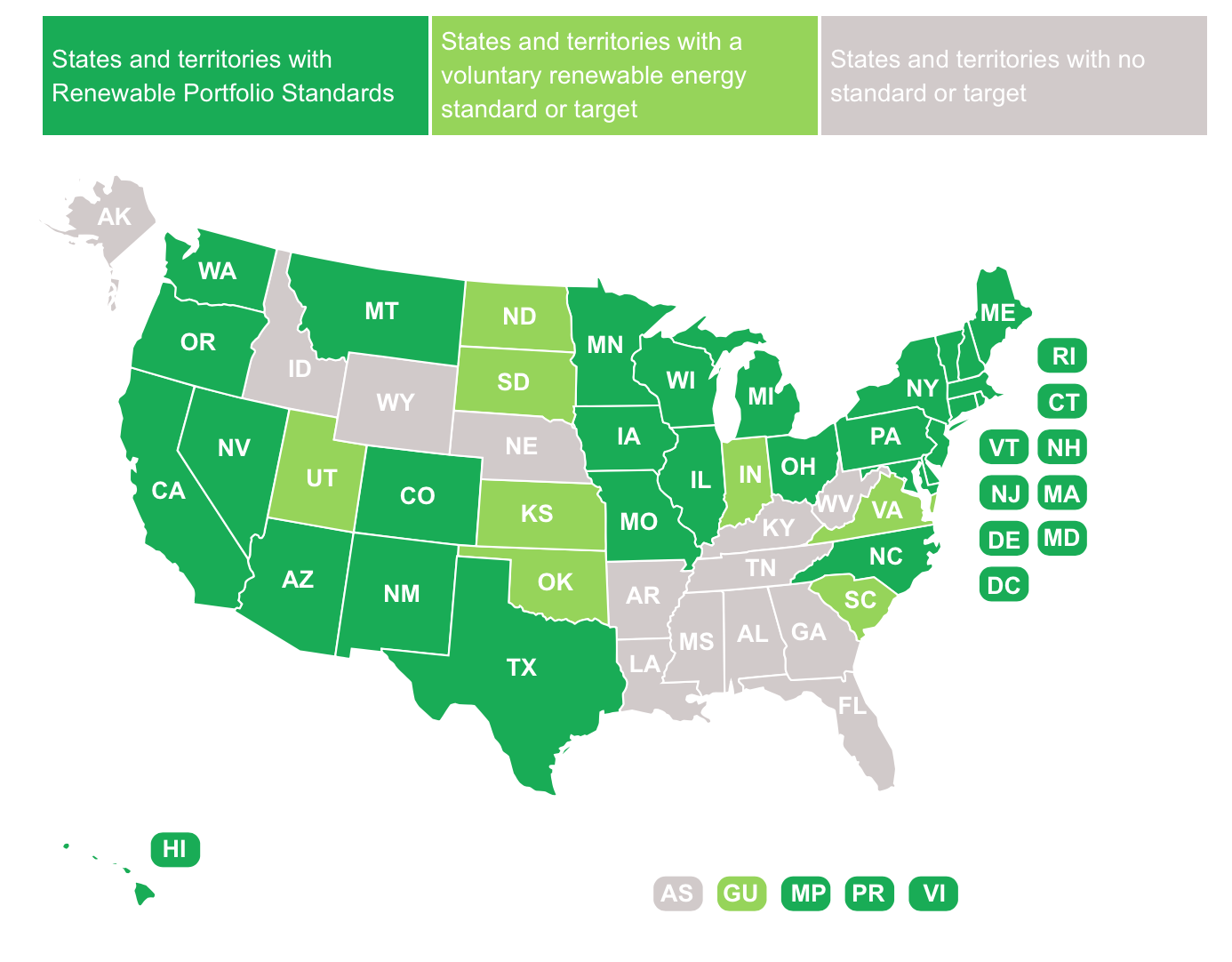 This map indicates whether a state has a RPS goal, standard, or neither. (Durkay)

Certain states have specific “credit multipliers” or “carve outs” regarding certain sources of energy that meet the state’s standard. While a credit multiplier allows for a specified source of energy to count more towards the standard than other sources, a carve out designates a certain amount of energy overall must come from one specified energy source. A leader in this field, New Jersey was the first state to create a carve out for a renewable energy source under their RPS with solar energy in 2001 (“New Jersey’s Clean Energy Program”). Since 2001, New Jersey is currently one of three states to have greater than 1 GW of solar installed capacity within their state (“New Jersey’s Clean Energy Program”). After solar’s success under an RPS carve out, the Offshore Wind Economic Development Act was signed into law in 2010, requiring the production of 1100MW of offshore wind electrical generation by 2020. Following their lead, neighboring state Maryland enacted the Maryland Offshore Energy Act in 2013, requiring 2.5% of electricity generated from renewable energy sources must come from offshore wind (Public Service Commission). While generally less ambitious than say Hawaii or California overall, I believe Maryland and New Jersey’s specifications towards offshore wind aide a growing industry by further mandating and incentivizing the energy source within the state RPS. There are currently eleven active commercial leases for new offshore wind sites, four of which are in New Jersey (2) and Maryland (2) (Energy and Interior).

Considering our President-elect’s rather unfortunate conservative approaches to issues regarding the environment and subsequently renewable energy, it is safe to assume that productive incentives involving offshore wind will originate from no higher than the state level. Under a state RPS, the state government produces financial and legislative incentives to encourage the generation of renewable energy resources. When we focus on a young renewable energy market like offshore wind, I believe states should institute more financial incentives within their standards to provide monetary aid in fulfilling RPS requirements. In order for offshore wind to be successful, I believe the source needs its own specific requirements (carve outs) or tax credits (credit multipliers) within a state RPS to further encourage producers to pursue offshore wind instead of other alternative renewable energy sources.