Offshore Wind and Potential Wildlife Impacts in the Atlantic 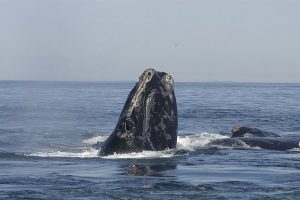 According to the National Offshore Wind Strategy Report published by the U.S. Department of Energy (DOE) and the U.S. Department of the Interior (DOI) in September of this year, offshore wind potential is almost double the nation’s current electricity consumption. With almost 80% of the electricity demand in the United States located in coastal states, “offshore wind has the potential to contribute significantly to a clean, affordable, and secure national energy mix.” While we have already outlined some of the financial, manufacturing, regulatory, and policy factors at play in offshore wind development, there are also a number of environmental and wildlife interests to consider.

There are some positive environmental externalities that are universal enough to be recognized across this field. Like terrestrial wind, offshore wind is carbon-free, a clean fuel alternative that will continue to help the nation wean off fossil fuels and lower our impacts on climate change. The National Offshore Wind Strategy Report indicated that offshore wind could provide a “1.8% reduction in cumulative GHG emissions (1,600 million tonnes of carbon dioxide equivalents) through 2050, saving $50 billion in associated global damages.” Wind energy is also significantly less water intensive than other alternatives, such as nuclear, helping reduce unnecessary water consumption. Furthermore, the quicker, shorter transmission from the turbines to the coastal load center will help reduce energy loss and create a more efficient system.

Because the first offshore wind farm just started generating energy last month, and there are currently 11 other active commercial leases in the Atlantic Ocean, we focused the rest of our research efforts on the Eastern U.S. seaboard. Though DOE and DOI notes that hundreds of environmental studies have been taken place at offshore wind farms in Europe, there are few official assessments that have been conducted from the U.S. coast. Pursuant with the National Environmental Policy Act (NEPA), environmental assessments are only conducted once there is an intent for a federal action with potential significant environmental impacts to occur. The assessment then determines the need for an Environmental Impact Statement (EIS), a much more detailed report that would give us the kind of information we’re looking for. In other words, because offshore wind in the U.S. is such a new business venture, there was no previous need to do this research. 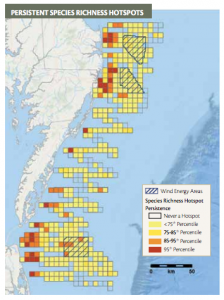 Environmental stressors such as noise concerns, habitat loss, and disruption of migration patterns have all been evaluated at sites across Europe. According to the National Wildlife Federation, the American Wind Energy Association, and the American Wind Wildlife Institute, several of these studies have found that offshore wind has fewer long-term impacts on wildlife than other energy sources. Luckily, there are also some similarities in wildlife distribution that we can observe between Europe and the Eastern U.S. to being extrapolating potential externalities. For instance, the red-throated loon, which resides in both locations, has experienced significant habitat loss and displacement and is now considered a vulnerable species. The common scoter, on the other hand, experienced temporary loss of habitat and feeding grounds, but this bird has since rebounded and returned to roost in the wind farm areas.

However, there are more differences than similarities that need to be considered. For one thing, U.S. offshore wind permits are all for locations farther offshore, due to higher wind speeds and a larger resource base. Similarly, the Mid-Atlantic Ecological Baseline Study found several other potential environmental issues specific to Atlantic wind projects. Looking at 13,000 km2 of ocean space, including the Virginia, Maryland and Delaware coasts, this study analyzed which marine species and flora might be negatively impacted by offshore wind development. Creatures like sea turtles, the north atlantic right whale, and several other bird species could all potentially face migration and habitat disruption from offshore wind construction.

Ultimately, more site-specific studies and evaluation of potential measures are needed to avoid and minimize environmental risks. As offshore wind energy continues to develop in the U.S., there will be an increasing need is an increasing need for environmental impact assessments and studies. According to the DOE, “some impact assumptions are founded in predictive information rather than in empirical research.” Vulnerable species and ecosystems will need to be protected and considered as offshore wind energy grows and expands.