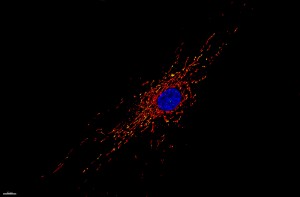 Mitochondria are organelles best known for ATP generation and their involvement in apoptosis, but they also play many other critical biological roles. Mitochondrial dysfunction and mitochondrial DNA mutations are associated with many human diseases, including neurological disorders, cancers, and diabetes (Nunnari and Soumalainen, 2011). Most cells have a very large number of mitochondria genomes, distributed throughout a mitochondrial networks. In many cells, mitochondria are highly interconnected and dynamically fuse and divide, rather being discrete kidney bean-shaped organelles as often previously depicted. For example, check out the beautiful picture to the right, taken by former PhD student Amanda Bess!

Furthermore, mitochondria and mitochondrial DNA are particularly vulnerable to some environmental stressors and lack some of the repair mechanisms present in the nucleus. Some of those reasons are illustrated in the schematic to the bottom right. We believe that mitochondria are understudied as targets of exposure to environmental toxins (and recently wrote a review discussing this: Meyer et al., 2013), and are working to rectify this. We are studying the sensitivity of the mitochondrial genome to specific stressors (see Environmental Toxicology), the developmental stage specificity of that sensitivity (mitochondrial biology is highly specific to cell type and developmental stage), and the biological response to such damage (including pathology and damage removal).

Certain kinds of DNA damage that are caused by many common environmental contaminants (some polycyclic aromatic hydrocarbons, mycotoxins, and others) as well as by ultraviolet light can not be repaired in the mitochondrial genome (because of the absence of nucleotide excision repair). We have learned that these irreparably damaged genomes can be removed by autophagy (in which individual mitochondria are removed by lysosomes; see the middle image on the right) and replaced, and are

Mitochondria are green, and lysosomes read; from Bess et al., 2013.

working to further understand this process.

Here are websites with general information about mitochondria: