Global Sanctuary or Global Gold Mine?: The pros and cons of exploration in the Arctic region 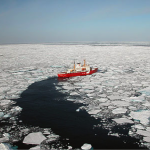 We have all heard various proclamations associated with global warming: “Save the polar bears!” “The ice is melting as lightening speeds!” Well, last time I checked the polar bears are still alive and thermal wear is required to visit the North Pole.

Well, imagine packing your parka to vacation in the Bahamas or paying for the extra month of air conditioning you need to stave off the humidity in southern California? There have, in fact, been noticeable changes since the start of the global warming campaign. With these changes come both opportunities for natural gas and oil exploration as well as health and environmental risks. Given the pros and cons of different approaches, would it be irresponsible to allow cautious, but still profit-driven, oil drilling in the Arctic? I believe so.

According to a study by NASA, the thickest and oldest parts of the Arctic caps are melting at the fastest rate that they have been since 1980. This part of the ice that survives at least two summers is called “multi-year ice”. This ice has been melting at a rate of -15.1% per decade in recent years. The size of the area of ice coverage hit an all-time low in 2008, rose for a little while, and then hit the second-lowest size in 2012.

The Arctic regulates weather patterns around the globe. The wind currents take warm air up to the Arctic and return at a cooled temperature. With a non-uniform melting of the ice, these wind patterns can be disrupted and result in “random” weather patterns. The Natural Resources Defense Council predicts that “climate change will worsen smog and causes plants to produce more pollen pollution, increasing respiratory health threats”. Lastly, the polar bears of course. The Arctic provides a home to a plethora of delicate animal species that depend on the frozen tundra for life.

The melting also presents some unique opportunities for oil and natural gas exploration. Many precautions are taken in the business of oil drilling and they seem to be paying off. Approximately 300-500 oil spills occur per year, but they only account for 12% of the oil that ends up in the ocean. In fact, only 0.001% of the oil that is transported is spilled.

Despite these impressive statistics, oil drilling still involves heat. Ice must be forcibly melted in order to clear a path for the oil rigs. During the extraction process, water containing a harmful toxin known as polycyclic aromatic hydrocarbons (PAH) gets removed with the oil and thrown overboard back in to the sea. At low concentrations, the toxins cause birth defects, but at high concentrations they can be lethal.

What drives my concern about diving into the Arctic is that it is a black gold mine for oil and natural gas. The people interested in the region are being driven by money. A recent article in the New York Times discussed the race to carve up the Arctic. With the UN Convention’s Law of the Sea of 1982 in place, ownership of many of the waters and continental shelves in the area have been given to bordering countries such as Greenland, Iceland, Canada, and Russia. The article brought attention to China’s obvious efforts to build good relations with these Arctic States by investing in the nation’s economy and other endeavors. This fervor has alarmed Western nations concerned about China’s intentions beyond natural resources considering the region is an effective launching pad to a number of different nations. The area also opens the door to new war strategies that involve traversing the Arctic sea and using the ice to one’s advantage. Between money and war, the environmental prestige of the Arctic would not stand a chance.

Economists are not in definite agreement, but there is evidence shown that increasing the domestic production of oil would only result in a 3¢ increase over a span of 10-20 years at best. By harvesting 3 years worth of oil in the Arctic, we very well may be doing more damage than we can foresee at this time. Rebuilding ice is not as simple as planting a tree. Arctic ice melting is more analogous to the ozone layer depletion: easy to do and hard to fix. We cannot fight Mother Nature. There could be more Hurricane Katrinas or California wildfires that plague our nation as a result of exacerbation in that area. Until more reliable prediction models are put in to place, I would not feel comfortable taking the region for granted in any capacity