The often-misquoted Henry David Thoreau once said, “in wildness is the preservation of the world”. However, in today’s ever growing, urbanized, technology-oriented world, how are people still able to hold onto this fleeting sense of what is wild?

Traditionally, wildness, often associated with wilderness, has been considered to be synonymous to “free from human influence”. According to Emma Marris in her controversial book Rambunctious Garden, this tendency gives a limited scope to the way that we define the wild, and really nature, around us. Further, she postulates that this way of thinking about the environment will continue to foster man’s ignorance and degradation of his surroundings. The argument for a more liberal characterization of the traditional definition of “wild”, to include abandoned city lots, highway median and roofs, would aid in creating a collective consciousness of the green space around us and the omnipresence of nature. Wildness can ultimately be found in your own, urban, developed backyard.

Upon reading Marris’ book and her push for innovative conservation solutions, my thoughts immediately fell to the prospect of urban agriculture ventures. Although not a substitute to the hundreds upon thousands of acres of highly managed (and eroded) farmland in the Midwest, urban gardens can serve as a small step in the direction of eco-consciousness. 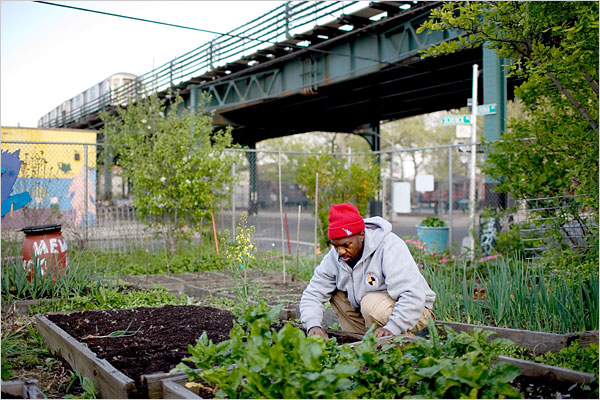 A city surveyor inspects an urban garden that lies near a elevated subway rail in Brooklyn, NY.

The push for “eating local” is at the forefront of the sustainable food movement that has quietly begun to sweep the nation. [i] This newfound awareness for food production and policy in the U.S has resulted in a surge of farmers markets and local food producers as well as consumer demand for their products, with “local food” sales estimated to be a nearly 7 billion dollar industry. [ii]

Urban agriculture seems to be the lovechild of innovative conservation solutions and American’s growing appetite  for locally harvested produce. For one, the increase of green space in cities in and of itself helps to decrease run off and increase shade in certain locations. [iii]Further, these added green areas could help to combat the “heat island” effect that currently plagues many cities through evapotranspiration that will effectively help mitigate high temperatures.[iv]

However, more in alignment with Marris’ argument is the fact that urban gardens help people reconnect with nature and their surroundings. By encountering gardens intermingled amongst skyscrapers, it becomes easier for people to intertwine the two and see the “wild” in their everyday lives. Further, people become more aware of where there food comes from. By producing fruits and vegetables on city roofs and abandoned lots, these ventures successfully limit the number of “food miles” between the consumer, you, and the sourcing of food as well make people more aware of the environment around them.

With population sizes increasing and with 6 out of 10 of us predicted to be living in cities by 2030, the adoption of more innovative agricultural solutions is a necessary step in cities all over the world. [v]  Again, although it is not a complete alternative to the traditional food system, urban ag is a viable supplement to our current industrial food sourcing model. What’s more, implementing these small farming ventures supports both sustainable agriculture as well as the expanded definition of nature in our everyday lives.

An urban agriculture venture in Seattle, a city that is taking initiative to implement urban ag friendly policy.

Through policy innovation and the implementation of urban agriculture infrastructure by nonprofit organizations and municipalities, our cities can move towards this model. For example, localities can help to aid in start up costs, a deterring factor for many average-income citizens, and incentivize urban agriculture by providing access to grants and low-interest loans.[vi]

Cities also have the power instill urban-ag friendly zoning laws, that allow for the protection of designated land from redevelopment while also encouraging farmers and gardeners to invest in infrastructure development. Through smart urban planning and land use codes, Seattle, for example, has created the opportunity for people to grow food in their yards for sale, host chickens, and build greenhouses in certain residential areas.[vii].

Local governments can and should create food policy councils to work towards the inclusion of local producers, urban farmers included. By creating a Department dedicated to communities or neighborhoods, these government bodies can start working to create community gardens, and community kitchens, both of which could be particularly impactful in low-income areas.

There are an unlimited number of steps that local governments can take to support urban agriculture. This sort of permeating change that will be needed to restructure our nation’s current food system starts with us – city and suburban dwellers who have a stake in where our food is produced. By holding our local legislators accountable on this issue, urban agriculture has the chance to flourish and change the future of urban planning and how we view our surroundings.