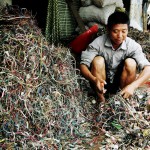 Over the last decade, quality of life and owning electronics have become inextricably linked.  As a result, the production and sale of electronic goods has skyrocketed worldwide.  Due to rapid advances in technology, there is a much wider range of products available and new versions of existing goods are being launched constantly.  Therefore, the rate at which electronics are being discarded (and sheer volume of waste) has increased drastically as well.  This electronic waste, or e-waste, is being exported to developing countries where crude ‘recycling’ techniques expose both the workers and the environment to dangerous chemicals.

So, How Much E-Waste is Actually out There?

In the United States, 3 million tons of e-waste (computers, printers, phones, cameras, televisions, refrigerators, etc.) is produced every year.  Globally, e-waste generation is growing by 40 million tons per year (1).  This is equivalent to filling around 15,000 football fields six feet deep with waste!  As unimaginable huge as this figure already is, it is increasing at an alarming rate.

In 2020, it is estimated that in China (which is currently the largest dumping ground), e-waste from computers will have jumped by 200-400% and mobile phones will increase by 700%.  In India, computer waste is predicted to rise by 500% and e-waste from mobile phones will be an astounding 18 times higher than current levels (yes, that is an 1800% jump) (1).  While some state-of-the-art electronic recycling facilities do exist, the majority of this e-waste is being shipped (legally and illegally) to developing countries.

Due to increased safety rules in Western countries, it is 10 times cheaper to export e-waste to developing countries than it is to locally recycle (3).  Though some e-waste exportation is legal, a large portion is illegal.  Electronics exported under the category of ‘used’ or ‘second-hand’ goods are not subject to any restrictions, and numerous other loopholes, export schemes, and corrupt officials have been discovered (4).  In 2005, inspections of 18 European seaports found that approximately 47% of exported waste was illegal and that 23,000 metric tons of e-waste was illegally shipped from the United Kingdom (5).

Common e-waste destinations include China, India, Pakistan, the Philippines, Nigeria, Ghana, and Brazil, just to name a few.  China is by far the most popular dumping ground and receives an estimated 70% of the 20-50 million tons to global e-waste produced yearly (3).  The e-waste industry employs 150,000 people in Guiyu, China, while the scrap yards in Delhi boast 25,000 workers and 20,000 tons of yearly waste (5). These countries create a ‘perfect storm’ for e-waste dumping: cheap and desperate labor with no added cost for health or safety regulations.

It is an undeniable fact that e-waste in “backyard” recycling operations poses a major threat to both human health and the environment.  Valuable metals such as gold and copper can be extracted from electronics, but this recovery process is often done in the cheapest and most unsafe way.

Plastics, which contain heavy metals and flame retardants, are burned in open piles and release deadly dioxin and furans.  Cathode ray tubes (CRTs) are broken with hammers to remove copper, a process that also releases toxic phosphor dust.  Circuit boards are literally cooked over open flames or in shallow pans, exposing workers to lead fumes.  Acid baths are used to extract gold from circuit board chips, spewing even more toxic gases into the air (6).  These processes release a wide variety of heavy metals including lead, cadmium, and mercury into the air, soil, and water (5).

Despite the obviously toxic nature of the most common ‘recycling’ techniques, over 90% of e-waste landfills or dumps have no environmental standards (3).  Unbelievably, Nigeria does not have a single legally licensed landfill despite having a population of 115 million and being a popular e-waste dumping ground (2).  The environmental impacts of unregulated ‘recycling’ sites are evident in polluted groundwater, extremely unsafe levels of lead and mercury in nearby rivers, and toxic emissions that contribute to global warming.

Workers at e-waste sites are usually migrants from extremely poor areas and are often children.  They have little to no access to gloves or face masks and are often too desperate for work or uniformed to care about the health risks.  Workers at e-waste sites are prone to skin rashes, cancer, weakening of the immune system, and respiratory, nerve, kidney, and brain damage (3).  In China’s Guiyu region, workers have extremely high levels of toxic fire retardants in their bodies and over 80% of the children already have lead poisoning.

What Can You do to Prevent E-Waste Dumping?

As with any illegal trade, it would be virtually impossible to stop all e-waste exportation and “backyard” recycling operations.  However, you can take measures to ensure that your e-waste is being properly disposed of.  Large consumer electronic stores such as Best Buy and Staples have in-store recycling programs.  You can also find out specific information on nearby certified e-waste recycling programs on your state government’s website.  A list of certified electronics recyclers can also be found through e-Stewards and R2 Solutions.