ZIJ presents on temperature/Pro at ISME16 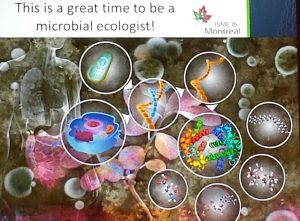 Abstract: The ecological success of the marine cyanobacteria Prochlorococcus is driven in part by its genomic diversity and the concentrations of the two dominant high light clades in the ocean have been shown to niche partition along latitudinal temperature gradients.  Nevertheless, little is known about how temperature affects carbon uptake and its fate for these genetically distinct, yet closely related cyanobacteria. Here we present results from temperature acclimation experiments and show that while temperature has an expected (and differential) effect on the major clades of Prochlorococcus, the temperature response curves of carbon uptake and growth rate are uncoupled. Further, there are substantial differences among the clades in how temperature affects the partitioning of this carbon to particulate (i.e. retained) or dissolved (i.e. dissolved organic carbon release) fates.  Physiology and transcript data show even more dramatic uncoupling of carbon uptake/fate growth rate (biomass accumulation or division) and regulation with different responses between the two clades.  These results highlight the importance of temperature in poising the fundamental processes of Prochlorococcus photosynthesis and growth, and that the physiological and regulatory responses are different between the major genetic clades. These results also demonstrate that future climate scenarios with increased temperature may significantly alter the distribution, biogeochemical rates and role of Prochlorococcus and its clades in broader marine microbial communities through changes in cell division and carbon fate.