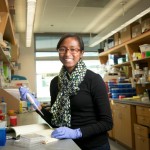 Congrats to ITEHP, Nicholas School PhD student, Lauren Wyatt, who has just returned from Sao Paolo, Brazil, where she won a Student Poster Competition at the International Society for Environmental Epidemiology (ISEE) annual conference for her research on mercury exposure. Lauren’s winning poster, “Characterizing Temporal Mercury Exposure from Hair in Women of Child-Bearing Age Exposed to Mercury from Regional Gold Mining in Madre de Dios, Peru,” bested dozens of other entries in the competition. In addition to bragging rights, she also brings home a $300 cash prize. Lauren’s co-authors on the poster were Duke faculty, Bill Pan, Heileen Hsu-Kim, both of whom are also ITEHP faculty members, as well as  Ernesto Ortiz, and Beth Feingold of SUNY-Albany.

ITEHP grad students are invited to attend a Non-Academic Career Workshop for School of Medicine biomedical graduate students on June 2, 2015. The workshop will be from 9:30 am -2:30 pm in the Great Hall at the Trent Semans Center. The day’s events include two speaker sessions and a networking lunch with the panelists. Please RSVP by May 29 at https://duke.qualtrics.com/SE/?SID=SV_54S15H3DHrTLwcl

The Departments of Immunology and Pharmacology & Cancer Biology are jointly organizing a non-academic career workshop for biomedical graduate students also sponsored by the School of Medicine and by the Graduate School’s inaugural Professional Development Grant competitive award.  The workshop speakers include Duke alumni who have completed their doctoral degrees from the hosting departments and are now successfully working as project managers, medical liasons in product development, consultants and personnel in quality control and regulatory affairs. There will be panel discussions and a networking lunch in between the two session

Our very own Cynthia Kuhn, Director of Graduate Studies, has earned a Golden Goose Award in recognition of her work on a federally funded study that has turned out to have a significant impact on society. Dr Kuhn and her collaborators received the award last week in a ceremony in Washington, DC. More on this prestigious honor and the thirty year old study that garnered the prize may be viewed here.

Registration is now open for the Fall 2014 Integrated Toxicology and Environmental Health Symposium which will be held on Friday, October 24th at the Searle Center on Duke’s West Campus.

The topic for this Symposium is: Low Dose Effects / Non-Monotonic Responses of Endocrine Disruptors

ABSTRACT: The publication of “Our Stolen Future” helped to spur research on endocrine disrupting contaminants (EDCs) and investigating their potential affects on human health and development. In the 1990s, the Environmental Protection Agency developed an Endocrine Disruptor Screening Program to evaluate pesticides and chemicals in commerce for their ability to disrupt the endocrine system. In classical toxicology research, it is often assumed that increased exposures will correlate with an increase in effect or toxicity. However, some research studies have challenged this dogma, suggesting that some EDCs can have greater effects at low doses relative to high doses, an effect known as a non-monotonic dose response (NMDR). Interpretation of these results is challenging, particularly within regulatory landscapes and risk assessment frameworks that operate under the assumption of a linear relationship between exposure dose and adverse effect. In 2013, EPA charged a group of scientists to review the published scientific literature and write a paper on the state of the science on NMDRs. One of the key goals of this exercise was to identify whether or not NMDRs occur, and if so, under what conditions. A draft paper was written by the EPA and then reviewed by the National Academy of Sciences in 2014. This symposium will highlight several studies on NMDRs, and discuss the findings of both the EPA paper and NAS evaluation of this report.

Dr. Bruce Blumberg, UC Irvine, will kick off the Fall ITEHP Seminar series with a talk titled, “Obesogens, Stem Cells and the Transgenerational Programming of Obesity”. Please join us on 9/6/13 in LSRC A247 at Noon for Dr. Blumberg’s presentation.

Wolfgang Liedtke, M.D., PhD, is an associate professor of medicine/neurology and neurobiology as well as a member of the ITEHP faculty. For more information on his team’s findings visit Duke Health

ITEHP Spring Symposium to be held on March 1st

The ITEHP Spring Symposium will be held on March 1st in The Doris Duke Center, Duke Gardens. Registration for this free, public event opened on February 1, 2013. Please email toxicology@duke.edu to register.

Our Spring 2013 Seminar Series kicks off on January 11th with a talk by ITEHP/Immunology Graduate student, Elizabeth Chan. LSRC A247 at Noon.