Radioactivity in groundwater resources in the Middle East and Northern Africa

As part of a third USAID (Middle East Research Cooperation, MERC) funded-project that involves scientists from Israel, Palestine, Jordan, and the US, we have investigated the occurrence of radium isotopes in groundwater from the Middle East, particularly in fossil groundwater from the Nubian Sandstone basins in Jordan and Israel. This study revealed that groundwater from the Disi sandstone aquifer in southern Jordan has high levels of Ra (two thousands per cent relative to the US-EPA drinking water standards; Ra_Jordan_EST). In a parallel study we also found high Ra also in groundwater from the Nubian Sandstone aquifer in the Negev, Israel. These findings raise concerns about the safety of this and similar non-renewable groundwater reservoirs given the high toxicity of radium in drinking water. In Jordan, this type of groundwater is expected to substitute other water sources and will become the major drinking water source in the future. The use of short-lived (223Ra and 224Ra) and long-lived (226Ra, 228Ra) radium isotopes, combined with analysis of the overall geochemistry, suggests that radium in this groundwater is derived primarily from the balance of physical recoil of the parent nuclides in the sandstone aquifer solids and Ra retention by adsorption onto clay minerals and oxides. The relationship between uniform recoil of Ra isotopes and differential retardation is attributed to the geological properties of the aquifers; aquifer with higher content of clay minerals and oxides would provide more adsorption sites, which would enhance Ra retardation. In contrast, in highly conductive aquifers, such as the Nubian sandstone aquifers, the balance between uniform recoil contribution of Ra from the aquifer solids and limited retardation due to the relatively low adsorption sites would generate Ra-rich groundwater.  We expect to conduct further research for validation of this hypothesis and expand the limited database on Ra isotopes in sandstone aquifers, particularly for the Middle East and Northern Africa where fossil groundwater is increasingly utilized due to the diminishing and contamination of the other water resources.

See Vengosh talks about radioactivity in the Middle East

In 2008, we received a research grant by NATO (Science for Peace program) for studying the salinity and radioactivity in groundwater resources in Morocco. Our preliminary results show that geothermal water from southern sub-Sahara Morocco has high levels of radium activities. We combine the Ra isotope systematics (e.g., 228Ra/226Ra ratio) with other geochemical tools, such as 87Sr/86Sr ratio in order to elucidate the origin of these geothermal systems and to determine possible groundwater – rock interactions from different geological terrains. We recently found that shallow groundwater from the Eocene aquifer in northwestern Morocco is also enriched in radium. The aquifer is associated with phosphate deposits that are know to contain high levels of uranium.

Naturally occurring contaminants in groundwater in the United States 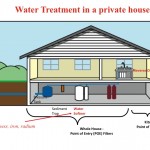 Approximately 43 million people in the United States use drinking water from private wells, which are not regulated by the Federal Safe Drinking Water Act (SDWA). Most of the private wells are located in rural areas and in many of them the quality of the local groundwater exceeds the Maximum Contaminant Levels (MCL) for various contaminants, such as arsenic, radon, lead, nitrate, and others. The long-term exposure to contaminants from drinking water poses a human health risk, especially in susceptible populations for which this contaminated groundwater is the major source of drinking water. Often the homeowners who utilize unregulated private wells are unaware of the potential hazards of the naturally occurring contaminants in the water they are consuming every day (Publications 44,50). Based on a USDA-funded project, we initiated an interdisciplinary project that investigates different elements related to the occurrence of naturally occurring contaminants of arsenic, radon, and radium in private wells in North Carolina. The project included an investigation of the geochemistry, public awareness, economic factors, treatment, and policies associated with the occurrence of naturally occurring contaminants in private wells in North Carolina. Our group has focused on the geochemistry of radon, radium (paper on Ra and Rn in NC), and arsenic (paper on arsenic remediation). We showed that the local geology plays an important role of the distribution of these contaminants, in addition to secondary factors such as the water chemistry (redox state of the water). We are currently working on arsenic  and its speciation in private wells wells from Union County in North Carolina where we investigate the conditions that control arsenic mobilization from the volcanic fracture rocks.

Arsenic biomarker and measuring the exposure to contaminants from drinking water 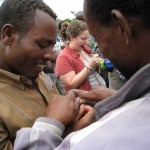 As part of our reserach on arsenic distribution in well water , we have initiated a study that investigates the distribution of arsenic in toenails from residents that are exposed to As in their drinking water (Publication ). A PhD student Brittany Merola has developed analytical procedures for nail extraction and trace metals analysis by ICP-MS. Preliminary results show a significant correlation between As in nails and drinking water , which is consistent with previous reports in the literature. We are currently expanding our database to include more   water-nails pairs in which we will consider gender, age, and race factors for better evaluation of the apparent distribution between drinking water and toenails. 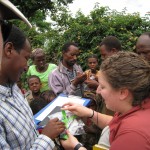 For the next phase, we plan to measure strontium isotopes in toenails in conjunction with well water, aiming to evaluate the source of other trace and major elements (Sr, Ca) in toenails and the relationship with the composition of the well water. We hope that this study will lead to the development of new biomarker techniques for elucidating the sources of trace metals in the human body. Since we have a good control on the water composition in a case of water consumption from a private well, we hope to be able to use geochemical techniques for understanding metabolic processes in the human body and possible exposure to inorganic contaminants in the environment.

We are working with researchers from Duke Comprehensive Cancer Center and UNC School of Public Health in an attempt to conduct interdisciplinary research composed of an epidemiological study coupled with geochemical investigation for the exposure of As in Union County where the As levels in private wells is very high. We hope that this interdisciplinary study would provide evidences for the links between As in well water, bioaccumulation in the human body, and health. Overall, the interface between inorganic isotope geochemistry and traditional epidemiological research could provide a very unique methodology for elucidating the impact of environmental hazards on human health.